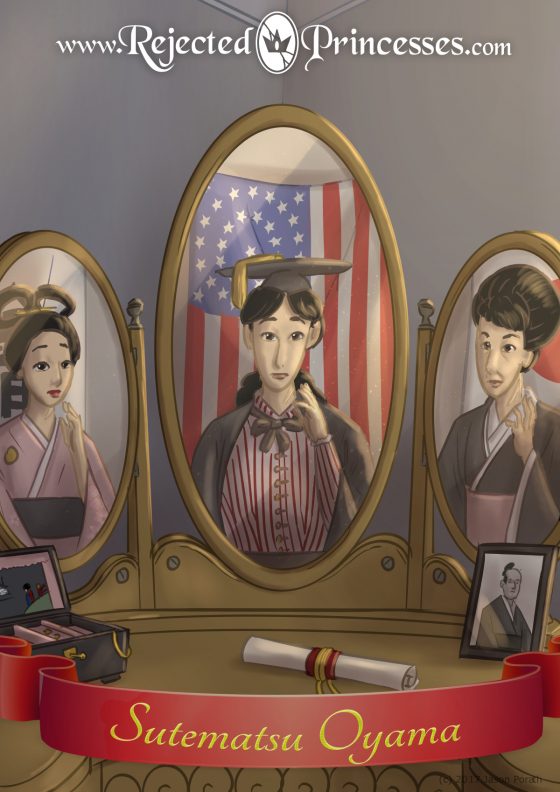 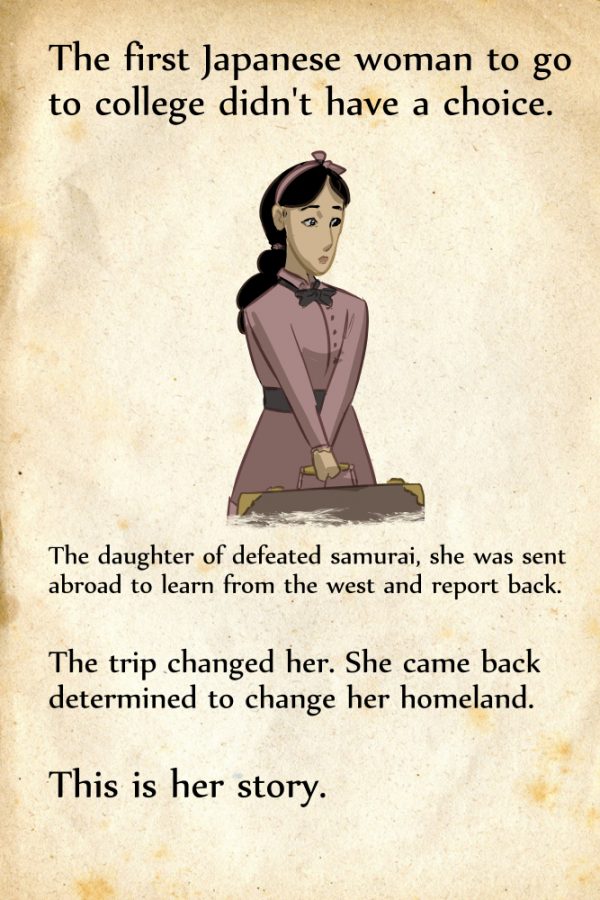 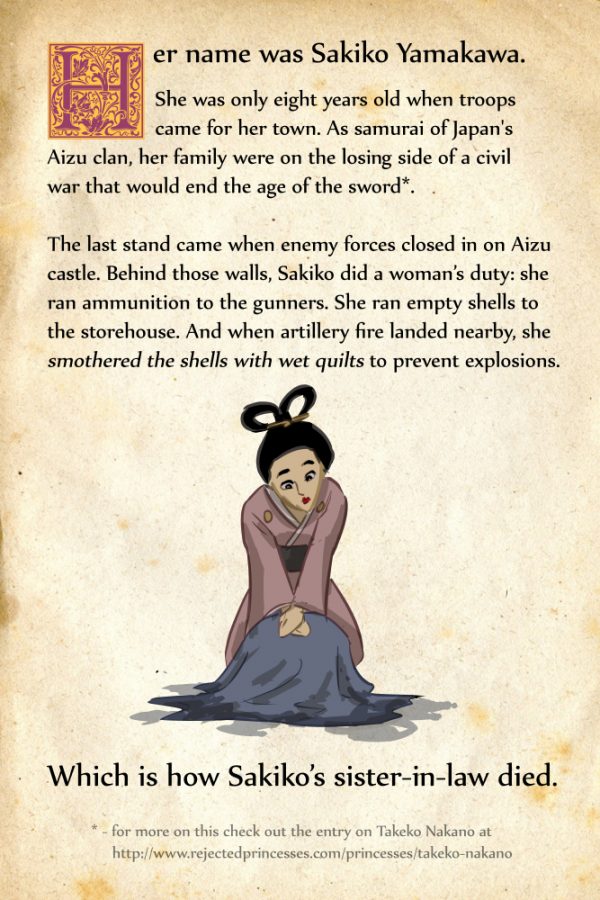 1 It’s a little unclear to me as to whether the wet quilts were left to older women, or to all women – I know for sure that Sakiko/Sutematsu was running ammunition back and forth.2 Initially I’d wanted to make the quilt design one of the Japanese military flags, with the rays coming out from the red sun, since it was covering a bomb – but it was ahistorical and likely confusing. 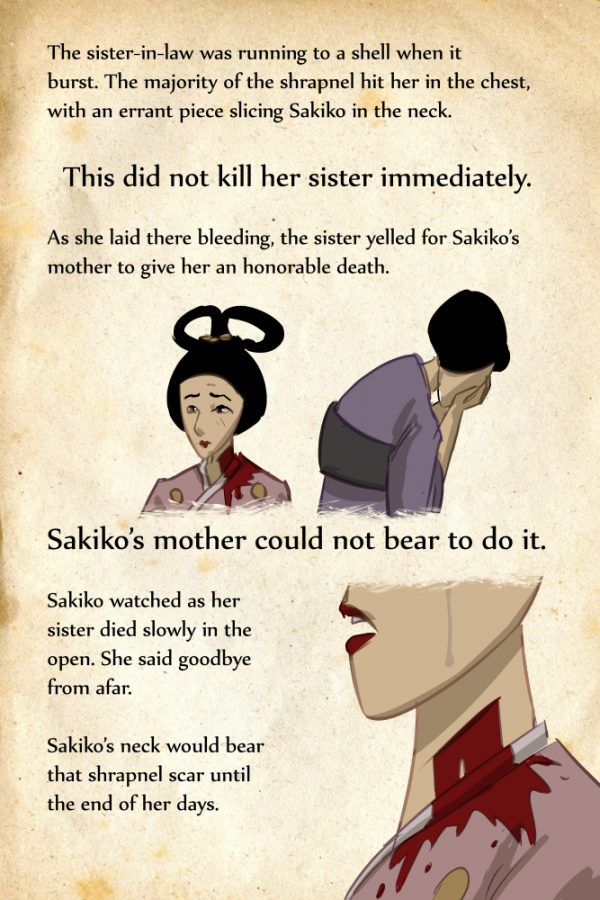 3 Her sister-in-law’s name was Tose. 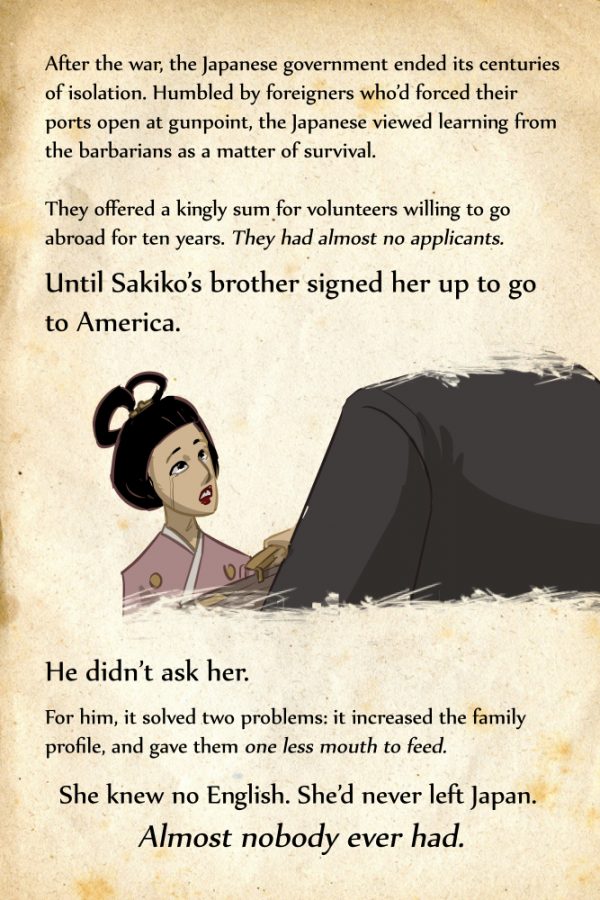 4 Her mother really didn’t want her to go, but after the death of Sakiko’s father, her brother Hiroshi was in charge – not just of their family, but much of the defeated citizens of Aizu. He led by example, eating poorly and starving his own family when the rest of his people didn’t have enough to eat.5 In the end, at least two other of Sakiko’s family would go abroad – her brother Kenjiro was already taking classes at Yale before she got to the US, and her other sister Misao would end up going to St. Petersburg and studying French. For many years, Sakiko/Sutematsu and Misao would have no common language. 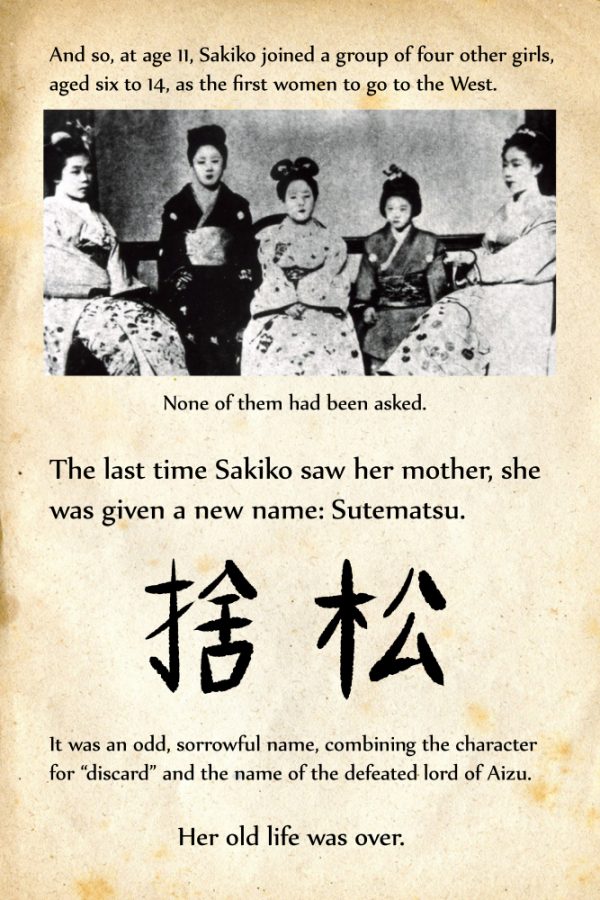 6 The first character, “sute,” is the base of the verb “suteru,” to discard. The second character, “matsu,” means “pine tree,” and was the first character of the family name of the defeated lord of Aizu – Katamori Matsudaira.7 Not verified in time for the initial publication of this story is an additional bit of tragedy about the name “Sutematsu.” “Matsu,” besides being the first part of the Matsudaira’s name, is a homonym for the verb “to wait” (待つ ).  Her mother was telling her she was waiting for her to return. 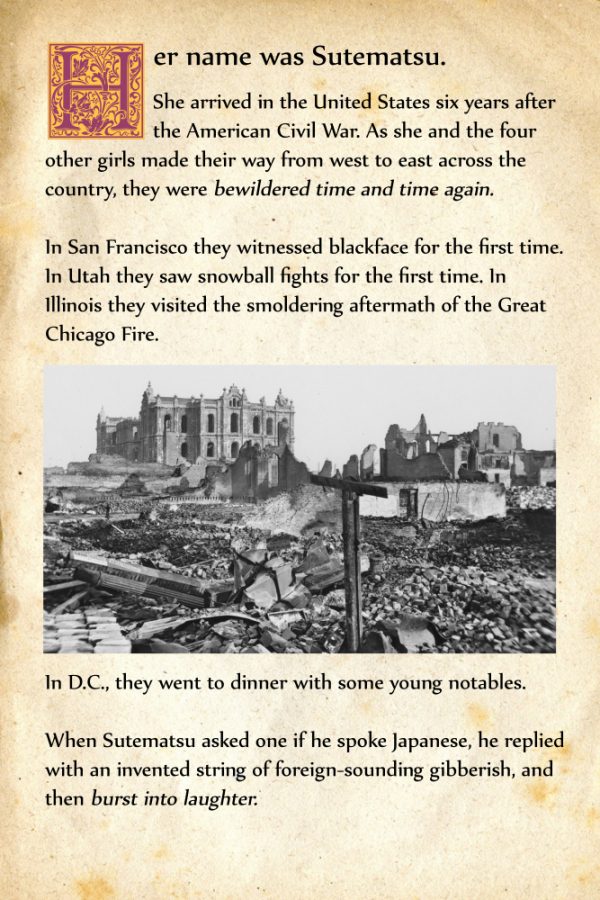 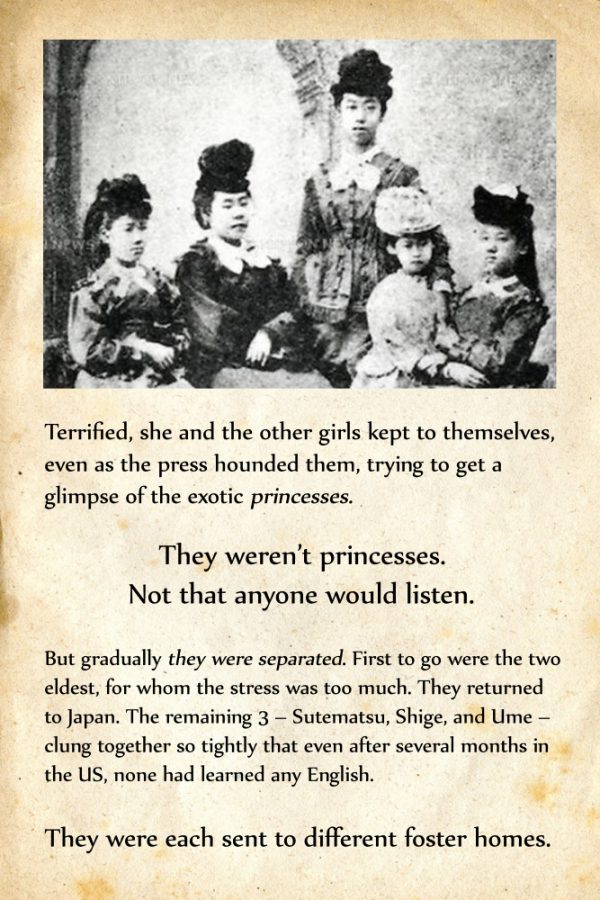 8 The older two girls were named Ryo and Tei – Ryo had been partially blinded from staring at the snow in Utah for too long (apparently that’s a thing), so both of them went back. They had relatively normal lives afterwards, and only saw the other three girls once or twice again. 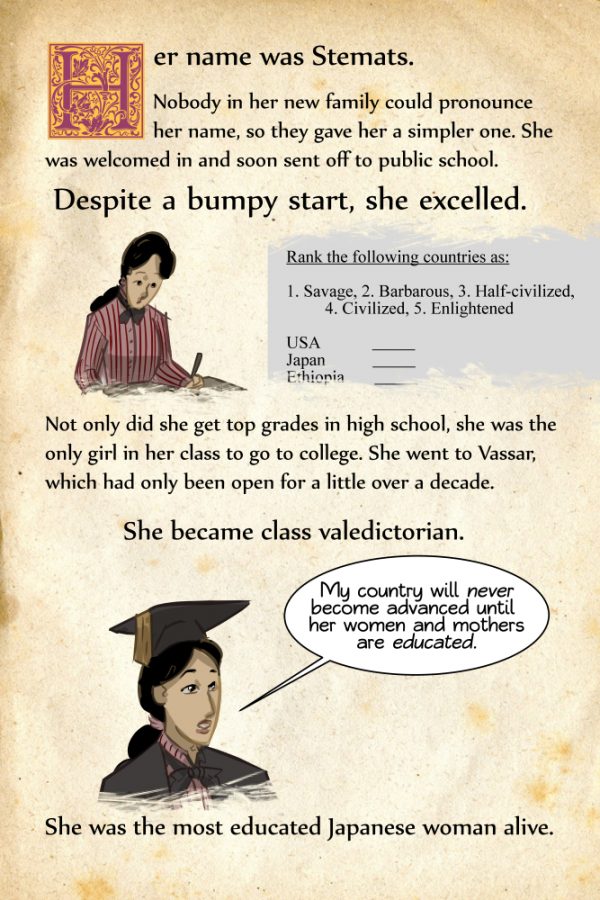 9 That was an actual question on a high school exam she took. It’s unknown how she answered.10 That’s a direct quote from her valedictorian speech, in which she laid out a forceful argument about the unequal trade relationship between the UK and Japan. She was a smart cookie.[2. Shige went to Vassar too, but did not get a bachelor’s degree, just a certificate in music. Shige ended up marrying a Japanese naval officer who’d also been sent abroad. They started a family and lived a pretty normal life after her time in the US.] 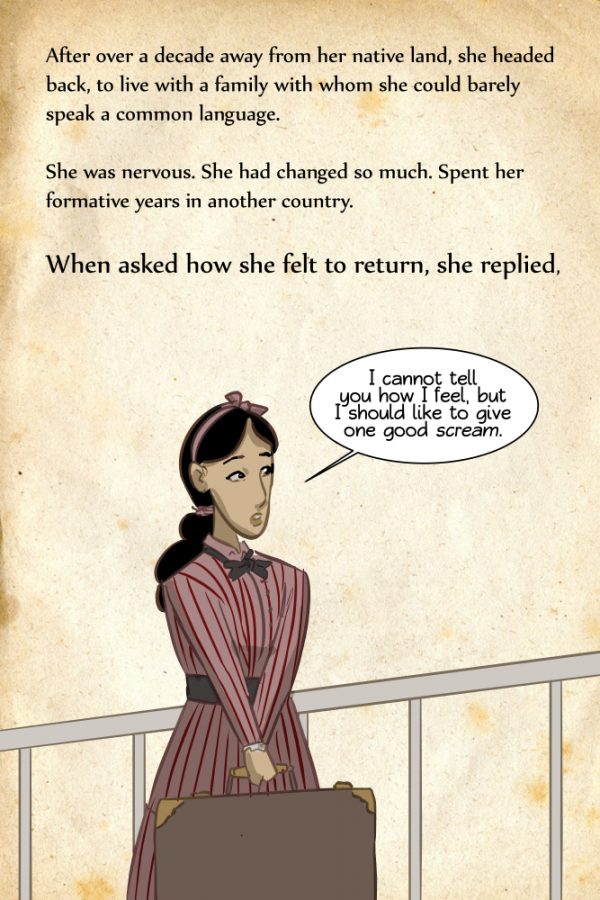 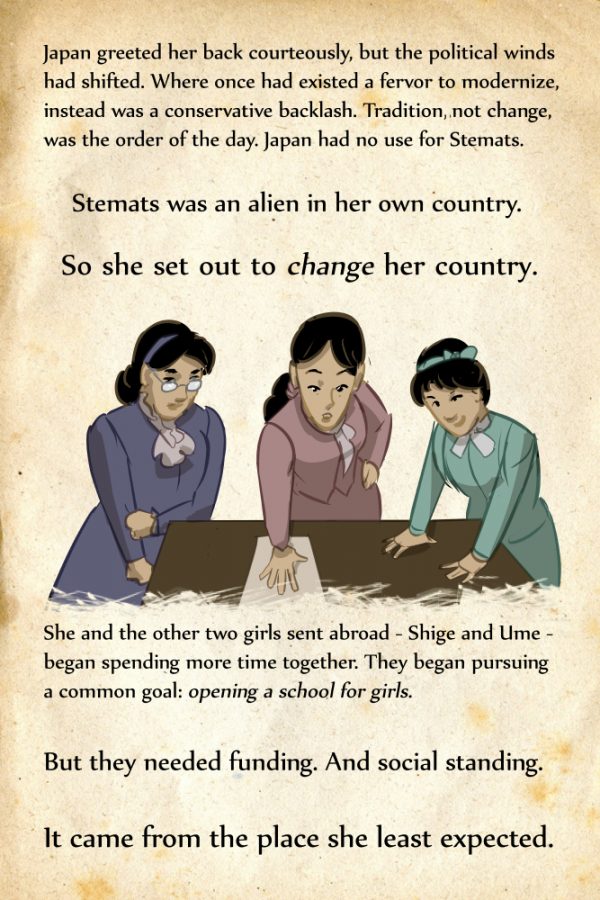 12 From left to right, here are Shige, Sutematsu, and Ume. Sutematsu was the one to start the idea, but after getting married, Ume really took it and ran with it. Ume, the youngest of the group and the most isolated by far, didn’t speak any Japanese when she came back. She was treated as an exotic invalid who couldn’t do anything properly, and it really upset her. She’d eventually go back and get a full degree at Bryn Mawr – she had been so young that she only graduated high school by the time she came back. 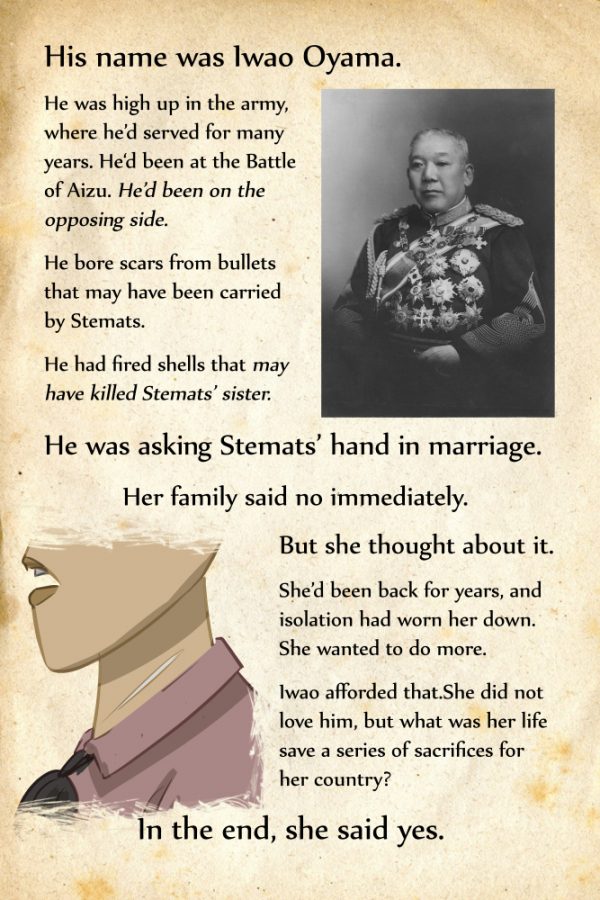 13 Iwao is an interesting character. He’d also spent time abroad – in France – and was recently widowed. He wanted a wife who would be a good companion for him on the international stage, and Sutematsu was the most eligible woman in Japan. He was by all accounts a good man, who’d become Minister of War and lead forces in the Russo-Japanese War. 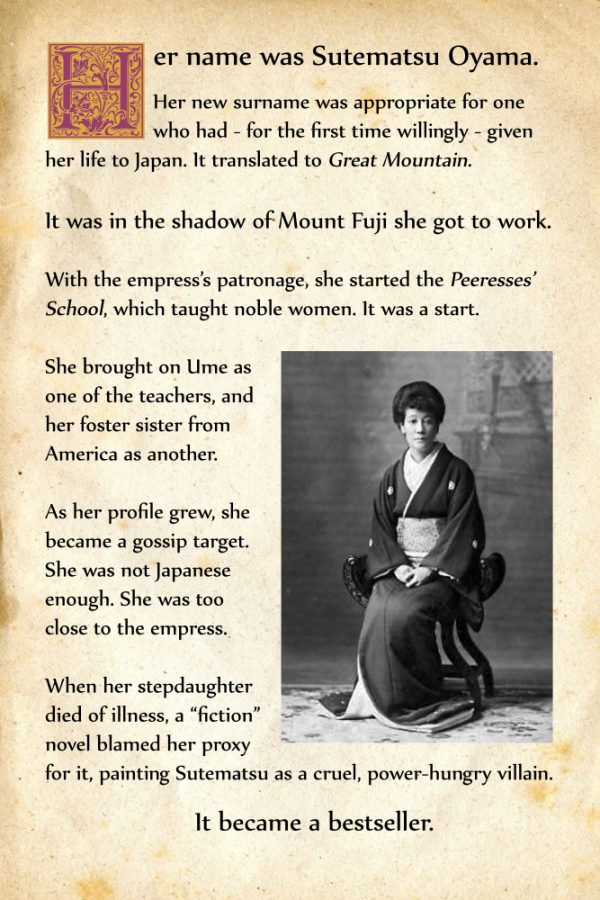 14 The novel referenced here is Hototogisu, a hallmark of Japanese literature. 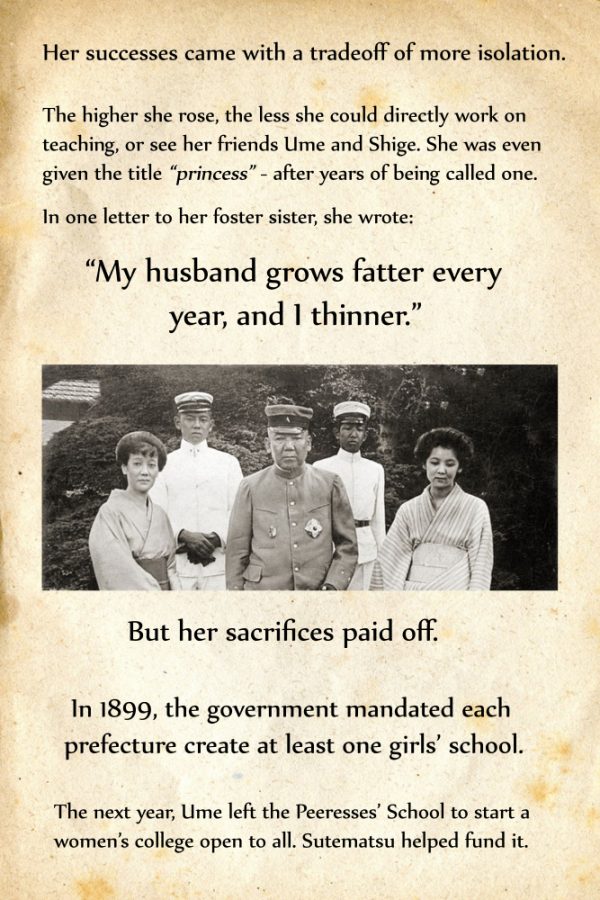 15 I brush over it here, but Sutematsu spent a lot of time on official functions. She threw a lot of balls, and organized charity drives – something that had never been done before in Japan. She felt very despondent that she had just become a housewife, despite her accomplishments. 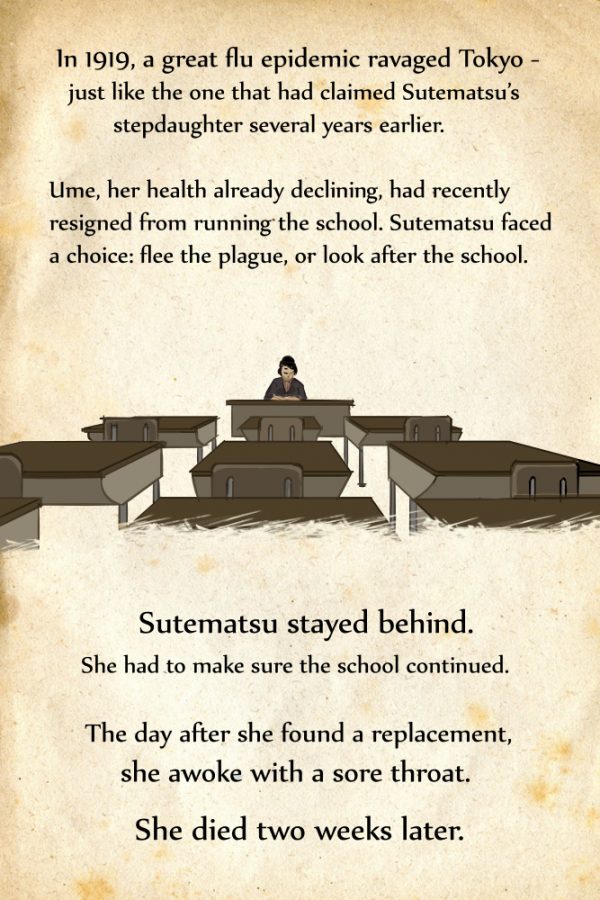 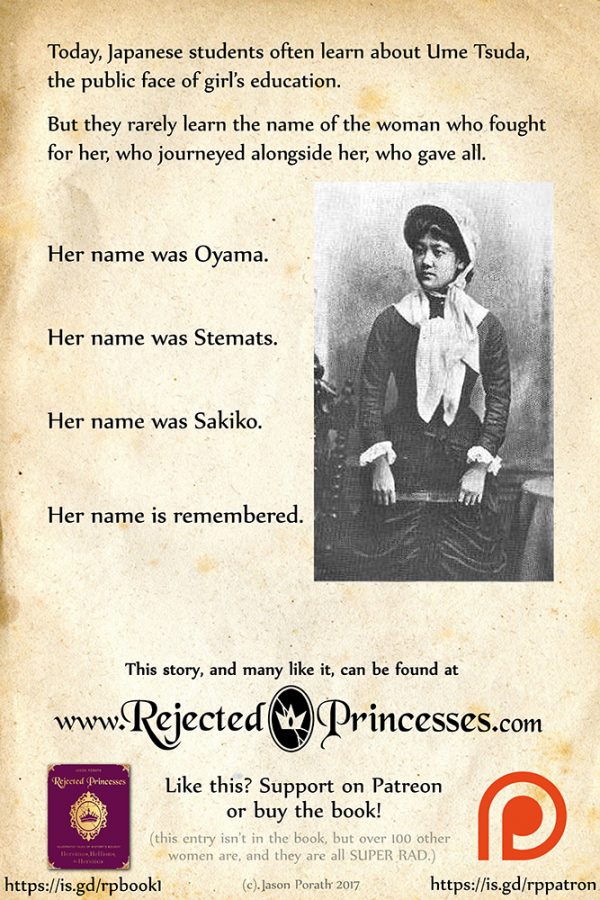 16 The school is still open. It is now called the Tsuda College, for Ume’s surname. Sutematsu’s involvement is little-known.17 Ume herself had a wild life, which I can’t get into here. She ended up meeting Helen Keller and Florence Nightingale, refusing to marry, running the school virtually by herself for years – she was in many ways even more isolated from Japanese society than Sutematsu. She even took her name off her family register and changed it to Umeko – which was a huge deal. Hers is a story for another time.

Pretty good guesses – a bunch guessed Yaeko Yamamoto, but she didn’t go to college (to my knowledge), and was not a child during the Battle of Aizu. But she’s likely going to get her own RP entry at some point!

I’m actually continuing the story from this era of history, exploring the ramification. So here’s your hint!

Only 9 years old at the fall of Aizu, this future Vassar grad would rise from tragedy to go on to see the world.

Nimura, Janice P. The Daughters of the Samurai.

Cam I early, cam I late, I found this woman at the gate. 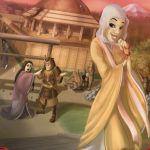 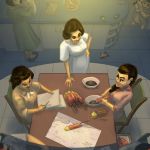 The Sisters Who Toppled a Dictatorship