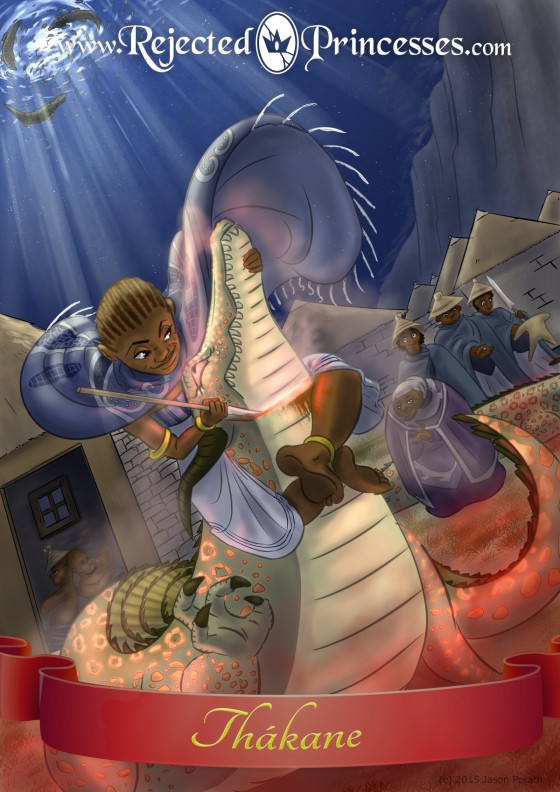 Did you know African folklore had dragons? I didn’t. Nor did I know it had dragon-slaying princesses.

Then I read the tale of Thákane.

Thákane was the daughter of a great chief. After said chief died, she was unfortunately saddled with the responsibility of raising her two lazy brothers. How lazy were these guys? Well, after months of Thákane taking them to warrior school way up in the mountains, then preparing their clothes, shields, and weapons for graduation, they refused to leave. Because the clothes weren’t good enough.

That’s right. These lazy bozos were like, “since we’re the sons of a great chief, we should be wearing something better than everyone else. We’re not leaving this training hut1 This was a thing. Warriors went away for several months to train in grass huts (maphoto) and had to wear splendid clothes for their loosening, or graduation. until we have a blanket, a cap, and a shield all made out of nanabolele skin. One for each of us.”

Now, in Basotho mythology, a nanabolele is a water-dwelling dragon. They are horrible creatures who give off light in the dark, and always arrive in a cloud of red smoke. Telling your sister to go fight one is like asking her to go punch a shark to death.

“You’re crazy,” Thákane replied. “Where am I supposed to get that?!”

“DAD could have done it,” they said.

“Dad would have whupped your ass,” she likely grumbled as she went back to the village and gathered up people to help. Predictably, they were like, “you want to do what!? That’s crazy, Thákane!” To which she was like, “if dad was around, they’d be having nanabolele skin jamboree, right?” Understanding that, culturally, she was expected to pick up the slack, the villagers groaned and fell in behind her.

So a huge group of the bravest Basotho left the village, hunting for nanabolele. But they didn’t know where to find them. So they went to a broad stream, tossed in some ox meat, and Thákane sang a diss song, trying to taunt the nanabolele out of the stream. But all that rustled out was a frog, who told them to keep going until they could “dip water with the husk of the poison plant, there you must cross.”

Not knowing what exactly that meant, they continued on, tossing meat into various bodies of water and singing, only to be told the same thing by a surprisingly well-informed and eloquent network of amphibians.

Finally they got to a very wide river with thick reeds, and did the same thing – but nothing happened. They threw increasing quantities of meat into the river, until, when they tossed in an entire ox, the river started bubbling. They stood back, ready for a fight, but the only thing to emerge was an old woman.

The old lady took them down underneath the water (where they seemed to have no problems breathing), to her deserted village. The nanabolele, she explained, had eaten everyone there, except the old lady, whose skin was too tough from working too hard all her life (yeah!). So they left her alive, and she  had to take care of them. But she was rather sick of it, and liked Thákane’s nanabolele diss song, so she was willing to help them out.

She hid the Basotho party in a deep hole, and soon the herd of nanabolele came back. They stomped around the village, looking for the humans they smelled, but unable to find them (and rather tired from hunting all day), they gave up and went to sleep. As soon as they were asleep, Thákane snuck up to the biggest one and slaughtered it. That’s ice cold, Thákane.

The Basotho turned to leave, but the old lady stopped them and handed over a small ironstone pebble. “The nanabolele are gonna be pissed when they wake up, y’all. I’m not even kidding,” she said. “Toss this down when they come after you, and it’ll turn into a mountain so high they can’t climb it.”

“Sure,” said the old lady. Presumably she hid them in the same hole she hid the Basotho. Poor oxen. You didn’t deserve that.

So, just as the old woman predicted, in the morning, the surviving nanabolele came flying after the Basotho hunting party, trailing a cloud of red smoke.Thákane threw down the magic pebble, and it instantly grew into a mountain. After much flailing and gnashing of teeth, the nanabolele, unable to climb the mountain, gave up and went home. The mountain thankfully downsized itself back to a pebble, and the Basotho continued on their way. Since the journey took a couple days, this happened multiple times, but they beat the nanabolele each time.

And so Thákane had a guy make shields, blankets, hats, hip clothes, and shoes out of the nanabolele – it was a big mo’fo apparently – and gave them to her brothers. Delighted at having unique glow-in-the-dark bling, the two left their grass huts to show off to everyone else at warrior school. Thankful to Thákane, they gave her a hundred head of cattle.

The story ends with the traditional “happily ever after”-esque sign-off of all Basotho tales: ke tsoma ka mathetho, “this is a true tale of the Basotho people.” 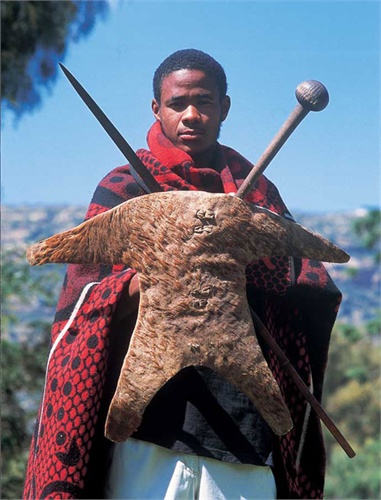 Fearless Girls, Wise Women, and Beloved Sisters: Heroines in Folktales from Around the World by Kathleen Ragan

A legend that may have been more of a thought experiment: what if Malinche had fought the Spanish?