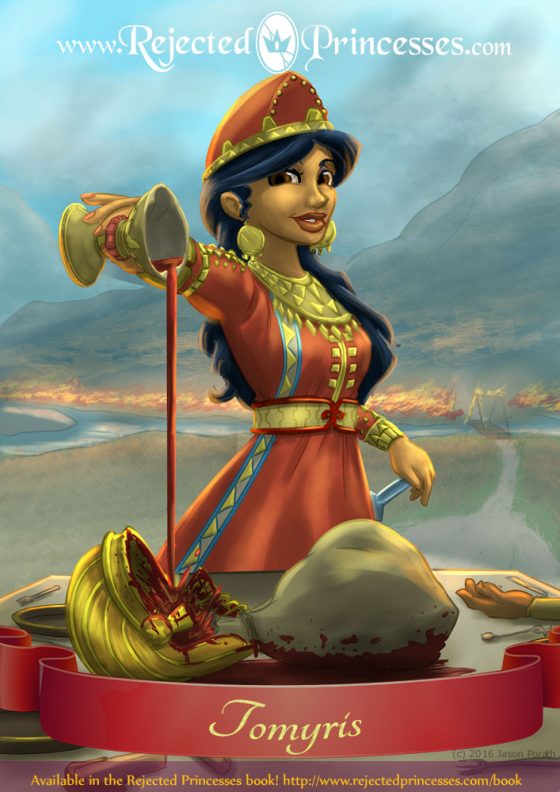 Tomyris was the widowed leader of the Massagetae, a semi-nomadic group living in Central Asia, around present-day Kazakhstan. Not much is known concretely about them (even their ethnicity is subject to debate), but a lot of the reported details (given by historians who are admittedly prone to hyperbole) are pretty, uh, colorful. In an awesome mashup of Logan’s Run and Soylent Green, they regularly sacrificed their elders when they got too old – presumably so the resulting geriatric meat would be nice and toasty when they subsequently devoured it. But the Massagetae would only cannibalize the healthier seniors. I mean, everyone knows that eating a sick old person is only a momentary pleasure and bound to get you talked about.

But while the Massagetae were enjoying their wrinkly long pig steaks, their neighbor Cyrus the Great was making plans to conquer them. Cyrus (who, to be clear, is not the same Cyrus/Xerxes in that horrible 300 movie) had founded the Achaemenid Empire, and, through relentless military conquests, built it to the largest empire the world had yet seen. Big as it was, though, it was apparently not big enough for Cyrus. And so, much like post-IPO Google, Cyrus was always looking for the next hostile takeover – in this case, the Massagetae.

Cyrus began his attempts on Tomyris’s holdings in the same manner as a Jane Austen villain: by proposing marriage.

Cyrus began his attempts on Tomyris’s holdings in the same manner as a Jane Austen villain: by proposing marriage. The widowed queen, however, was no blushing Regency ingenue, and, seeing through his obvious scheme, laughed off his proposal. Cyrus took this jilting about as well as you’d expect from an all-powerful sovereign, and went to plan B: declaring war and invading her country.

When word reached Tomyris that Cyrus was building a bridge across the river from her, she said, and I’m paraphrasing: “Okay dick, I’ll take you on, but I ain’t having no scrub-ass bridge between your crib and mine. We can either do this in my backyard or yours. You let me know where you want to throw down and I’ll beat your ass then and there. But no bridges, homey.” Again, paraphrasing.

Now, Cyrus was prepared to tumble on his side of the river, and he would have done so were it not for the shitty advice of one of his bros, Croesus. After all his other advisors had already settled on a plan, Croesus stood up and was like, “Nah, dog! If you lose ground to this chick, everyone is gonna mad disrespect you. ‘Sides, you know what chicks are like. Let them up in your pad and soon they’re all rearranging crap and getting their armies to take shit for themselves. Bro up and get in her business! Don’t even tell her you’re crossing the river to her side, dude! Neg that shit! Alpha as fuck!”

So Cyrus followed Croesus’s plan and began his invasion, using some sneaky tactics. He built a bridge, crossed the river, and sent his worst soldiers to begin waging war by building an unusual siege weapon: a massive banquet. Tomyris’s men soon found Cyrus’s poor soldiers-turned-sous-chefs and murdered them to death. Subsequently, the Massagetae helped themselves to the food at the abandoned camp, and promptly got blitzed on the wine — an intoxicant to which they’d had little previous exposure. Once the Massagetae were falling down drunk, Cyrus valiantly moved in, slaughtering a great many and taking prisoners of the rest, including Tomyris’s son.

“I swear by the sun, the sovereign lord of the Massagetae, bloodthirsty as you are, I will give you your fill of blood.”

You can imagine, this displeased Tomyris. She wrote Cyrus again, calling him a bloodthirsty coward who let poison do his work. She ended her missive by commanding him to release her son and retreat. “Refuse,” she said, “and I swear by the sun, the sovereign lord of the Massagetae, bloodthirsty as you are, I will give you your fill of blood.”

From there things got worse: Cyrus ignored her message, Tomyris’s son committed suicide, and Tomyris went after Cyrus hard. At the end of the ensuing battle — described by the historian Herodotus as “more violent than any others fought between foreign nations” — Tomyris was victorious and Cyrus was dead.

Afterwards, Tomyris filled a wine skin with human blood and ordered Cyrus’s lifeless corpse brought to her. Cutting off his head and stuffing it into the wine sack, she proclaimed: “See now, I fulfill my threat; you have your fill of blood.”

(to be clear: this is one of several accounts of Cyrus’s death, although this is one of the most regularly repeated ones — others claimed he died under totally different circumstances. To this day, nobody is sure which version is correct. History is complicated!)

It is worth noting that Cyrus (and, obliquely, Croesus) had already been beaten by a woman prior to Cyrus’s encounter with Tomyris. Several years earlier, Cyrus had invaded the Amyrgians and took their king prisoner — thus pissing off the Amyrgian queen, Sparethra. In response, she raised an army of 500,000 people (40% of them women), kicked his ass, and saved her husband. For reference, the average size of Cyrus’s armies hovered in the 150,000-200,000 size, so this was a massive group. Later, Sparethra’s forces swore fealty to Cyrus. Why, I am unsure – possibly because, need to conquer aside, Cyrus had a pretty good empire going, with emphasis on scholarship and human rights. In general he actually was pretty great, but that’s besides the point — this is not his story. In any event, Sparethra’s forces later helped Cyrus conquer yet another opponent: the aforementioned Croesus, whom Cyrus ordered to be set on fire. He eventually changed his mind, and Croesus fell in line behind Cyrus, going on to give him terrible advice.

A lot of you guessed this week’s entry correctly. So here’s the shout-out list (and I hope I didn’t miss anyone — been traveling, so haven’t had a ton of time to do proper collections):

What? You SAID you were thirsty, Cyrus.

This one was thankfully pretty easy to research, as there’s only one notable source for it: Herodotus. All other historians came centuries later and were pretty much just repeating what he said.

Civilization games introduce Tomyris as playable character
It was recently announced that in the game Civilization VI you can play as Tomyris and the Scythians.

On Tirgatao and Scythian Ethnicity
There's lots of evidence to Scythians being red-haired and light skinned. So why did I not portray Tirgatao that way?

Tirgatao
Abandoned and imprisoned, this real-life Amazon took back the life she had stolen away.

Nog Prize #6: Cyrus and Croesus were not bros
A reader brought to my attention that Cyrus the Great actually set Croesus on fire, so yeah - depicting them as best buds was probably somewhat inaccurate.

Meet the Amazons
We kick off Amazon Week by meeting Worthy of Armor, Don’t Fail, Princess, Battle Cry, and Hot Flanks - and exploring the historical evidence for amazons!

Nog Prizes 3-5
In which I am corrected on Athena's shield, Irish mythology, and the identity of Tomyris's foe!

Calafia
Black, Muslim warrior queen of a tribe of griffin-riding Amazons - and the honest-to-god namesake of California.

Had this “Queen of the Sword” been born ever so slightly later, her horseback antics might have made her famous to present day.