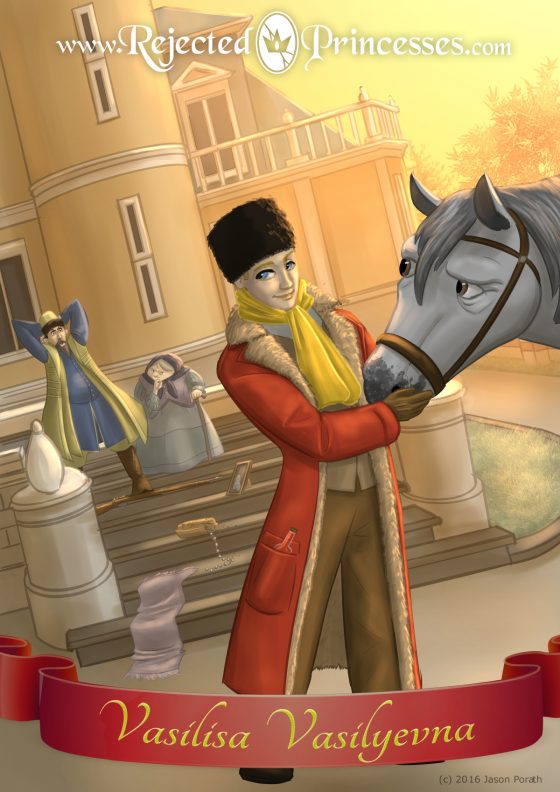 The first thing the tale of Vasilisa Vasilyevna would have you know about her was that she was not like other girls: for one thing, she shot guns. For another, she dressed like a boy. But most important of all, the story notes, she was a great lover of vodka.

(yes, this is a Russian folktale, why do you ask?)

The last attribute, apparently, is what caused many to believe that this priest’s daughter was actually a priests’ son. Fully comfortable with this identity, she often went by Vasili Vasilyevich (the male form of her name).

One day, she was out hunting deer on horseback (astride, not sidesaddle, the tale notes), when she caught the attention of the local Tsar, a fella named Barkhat. Struck by her general badassitude, he exclaimed, “who is this young man?” – only to be informed by his attendant that he was actually a she.

“Oh, no, that can’t be true,” said the Tsar, who had very myopic views on gender. “I’m gonna get to the bottom of this.”

He consulted his housekeeper (who, being an old Russian lady, knew all) as to the best way to  determine if Vasilisa was a dude or a lady. The housekeeper told the Tsar to have Vasilisa over for dinner, and hang a gun on one wall and some embroidery on the other. Any real man, the housekeeper reasoned, would react to the gun first.

However, Vasilisa, being woke af, decided to mess with their toxic views on masculinity.

At the Tsar’s invitation, Vasilisa joined the Tsar for dinner. They ate sweetmeats and drank, but as soon as she saw the embroidery, she let out a gasp of disgust. “Whatever nonsense do you have hanging up there, Tsar Barkhat? I never saw such girlish trash in my father’s house, and I have never heard of it, and yet you find it hanging in Tsar Barkhat’s palace!”

She then left. Courteously, the story notes.

But the Tsar’s imagination still could not stretch beyond cultural gender dichotomies, and with the housekeeper’s help, he set another test. This time, he was to serve her a pie with pearls in it. If Vasilisa was a girl, they were sure, she’d take the pearls gleefully. If a boy, she’d throw it under the table, because touching a pearl revokes your man card or something, I don’t know.

So again she shows up, drinks with the Tsar (one begins to wonder how much of this was done for free food), and soon enough she found the pearls. She flung the entire plate under the table, and emasculated the Tsar for his peculiar culinary choices: “Who put these into the pie? I never saw such girlish trash in my father’s house, and I have never heard of it, and yet you find it in Tsar Barkhat’s food!”

And again, the story notes, she left. Courteously, all of her speech to the contrary.

At wit’s end, the Tsar-housekeeper duo devised the ultimate bro move: inviting Vasilisa in the bath with him. If Vasilisa was female, he reasoned, she’d never join him in the steam baths. And if male, they could just talk about sports, do some yoga, and chill.

So again, Vasilisa rode out on her old gray horse and drank the Tsar’s palace dry. Tsar Barkhat invited her the baths, and she readily agreed – however, she was far quicker than the old man. By the time he’d slipped out of his cumbersome clothes, she’d not only already been in and out of the bath, but she’d also written a letter and left it with the Tsar’s attendants. It read:

“Oh you crow, you Tsar Barkhat! The crow has not caught the falcon in the garden. I am not Vasili Vasilyevich, but Vasilisa Vasilyevna!”

And thus was the Tsar fooled, and his views on gender expanded greatly.

Not applicable this time, since this was a stopgap entry due to all the time spent on the road.

Okay, this time for real, now that the book tour is over:

Two ruthless queens of the Sydney underground – but their deeds were far from Devine.