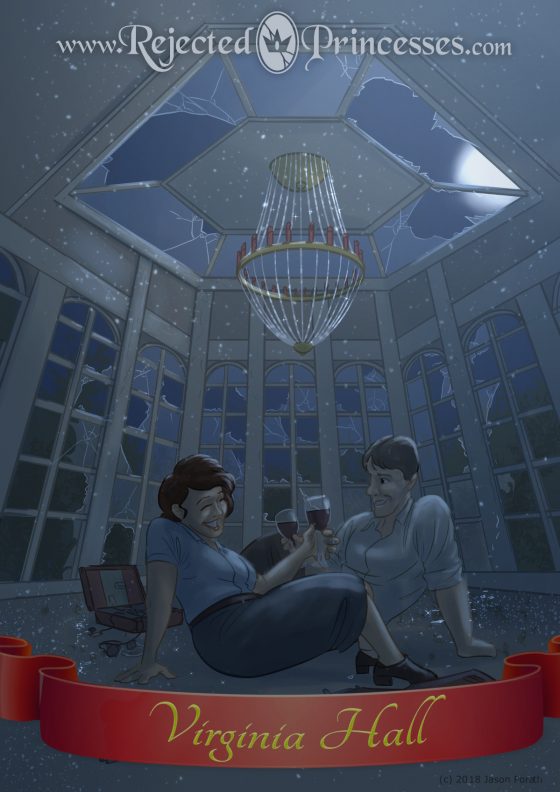 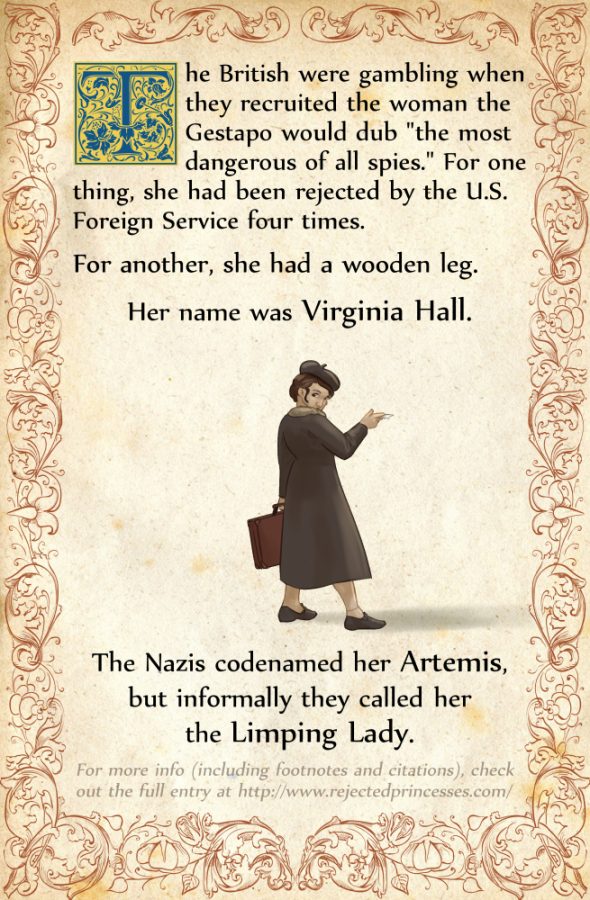 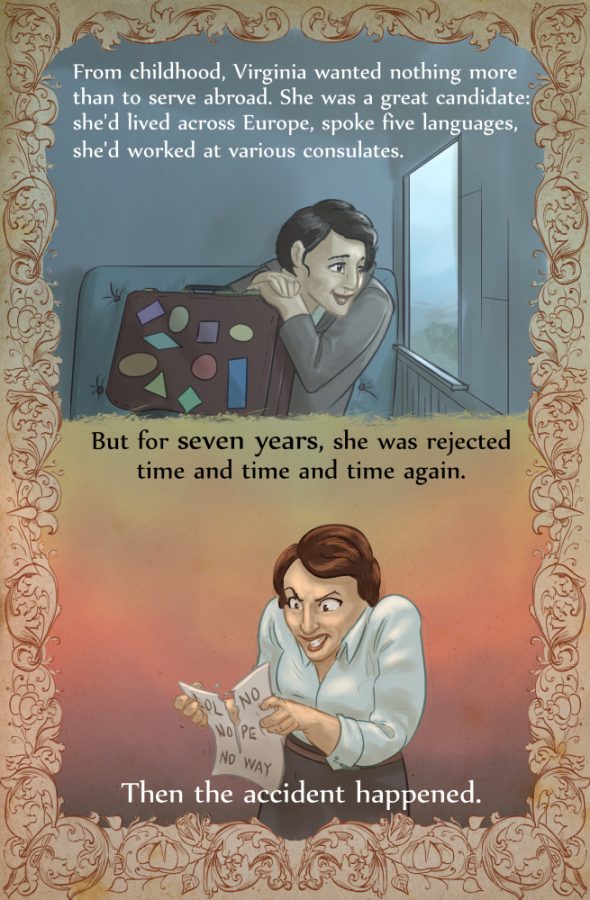 1 Virginia had a very privileged childhood, which not only allowed her to travel all over Europe, but also spend a lot of time on a farm in New England. She learned to hunt and handle guns from her dad, and would wear snakes as bracelets.2 She was hellbent on getting a good education, and studied all over Europe. Throughout, she kept applying for the Foreign Service, and getting rejected. Biographer Judith Pearson makes the case that she was convinced it was because she was a woman, which is not an unreasonable assumption. 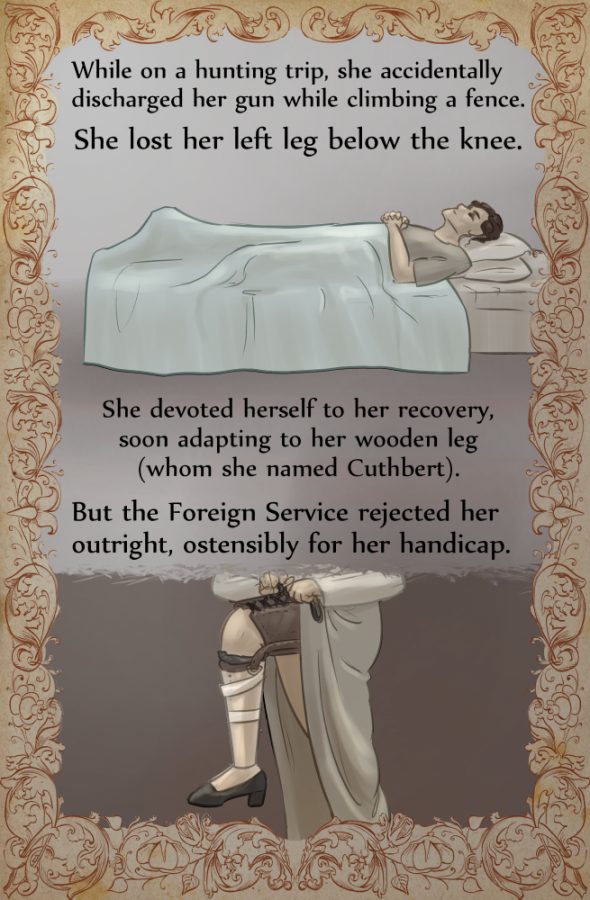 3 This hunting accident happened while she was climbing a fence – her gun went off and got her in the leg.4 She fought this final rejection tooth and nail, getting it all the way to President Franklin Roosevelt’s desk. 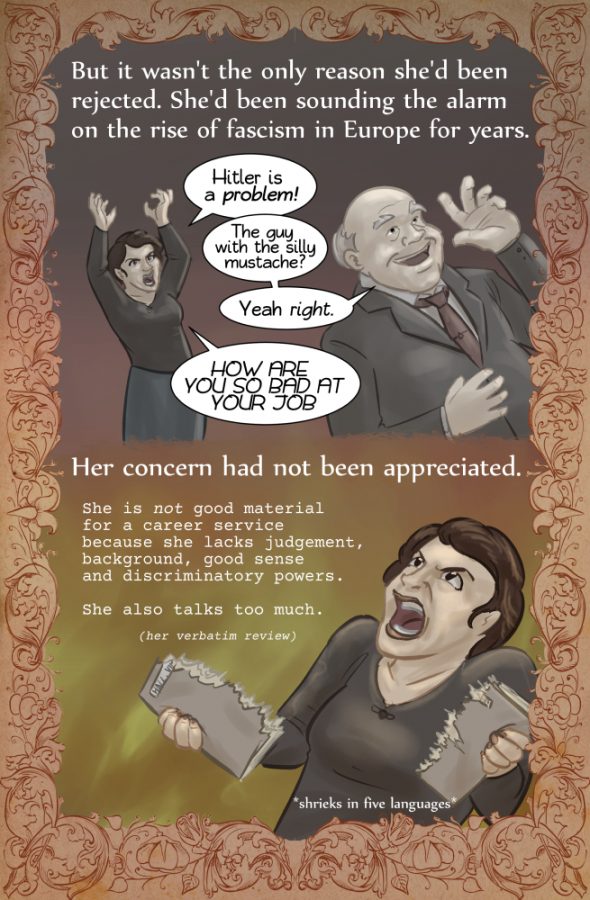 5 This top exchange is actually taken from one of her mother’s letters to her, as an anecdote about attitudes stateside. The consulates where Virginia worked off and on had a better view on such things, but her review still makes it clear that she wasn’t one to keep her mouth shut. 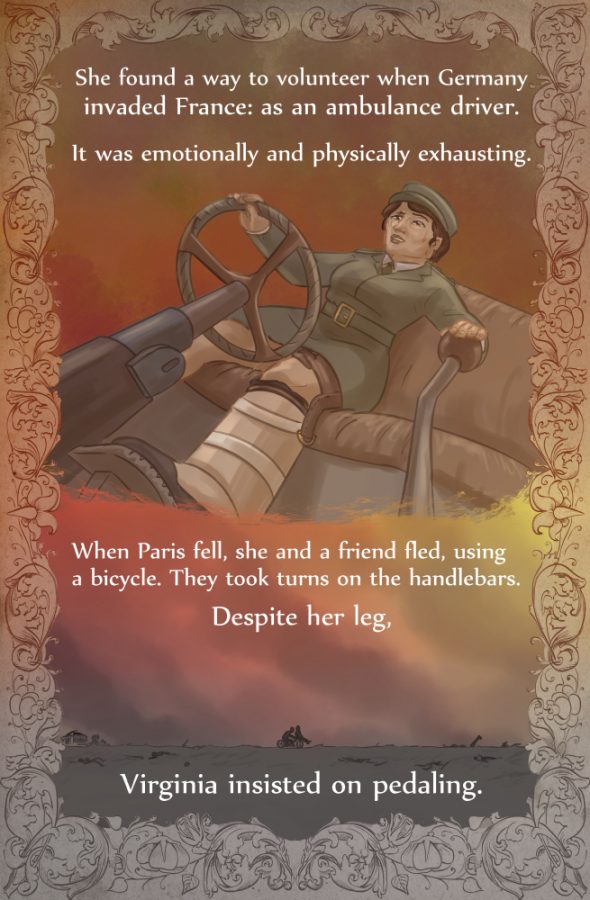 6 The friend in question was her Jewish nurse friend Clare. While nursing people on the front lines, Virginia would come across an incredibly wounded soldier who was missing half his face, and died before her eyes. Only after would she realize it was Clare’s brother.7 Virginia was tremendously troubled by the rise of anti-immigrant, anti-Semitic sentiments, such as this, published in a French newspaper editorial: ““Why should we, the citizens of France, be responsible for the dirty Jews of other countries? They flocked here like noisy geese and now we must give them food and shelter, already in such short demand. We are taking bread out of our children’s mouths to feed theirs.” 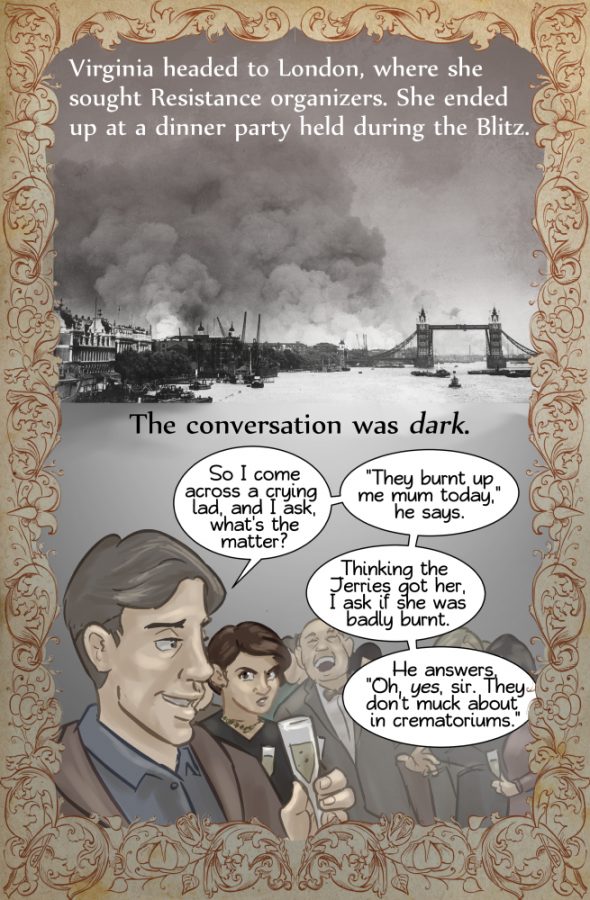 8 I’m actually unsure as to Virginia’s response to this anecdote, or any of the other off-color ones recounted. The people at this party, it should be made clear, were mostly all helping with the volunteer effort. The guy who relayed the crematorium story was an ambulance driver. 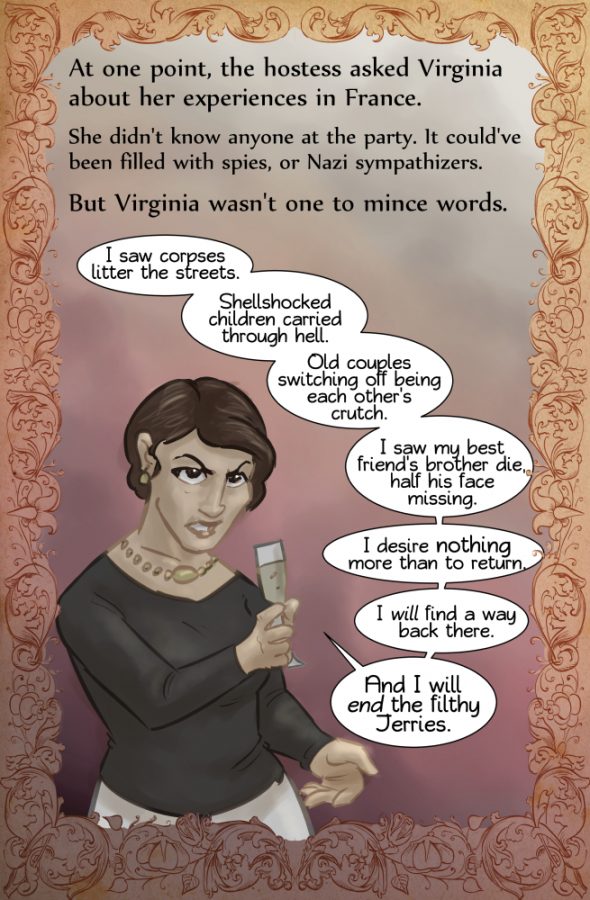 9 This isn’t a verbatim quote, although she did make reference to wanting to go back to confront the “filthy Jerries”. 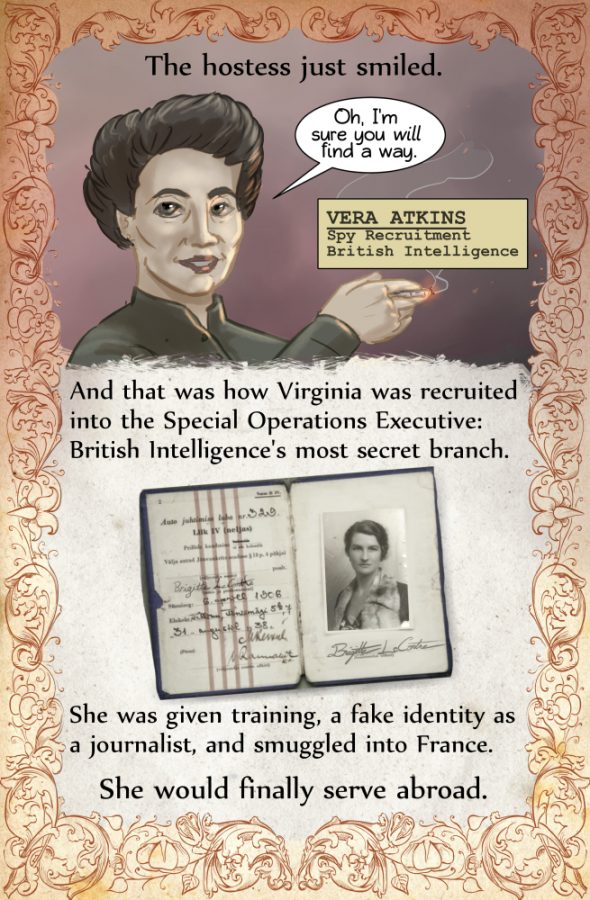 10 Vera was also the one who sent former RP Noor Inayat Khan to the front lines, as well as many other female agents. The SOE had been given license by Churchill to “set Europe ablaze,” and that was her intention.11 Virginia went through expedited training, and proved quite adept at firearms, knife fighting, and withstanding interrogations. She wasn’t so good at Morse Code. She was one of  two female recruits at the time; the other was codenamed Delphine.12 The document on the bottom part is actually her Estonian driver license, doctored somewhat – I gave her a different picture, and put in the name “Brigitte LeContre,” which she used. She got an honest-to-god job with the New York Post and filed regular reports with them. She was sent in via boat instead of parachute because of her leg. She was carrying several million francs on bands around her legs. 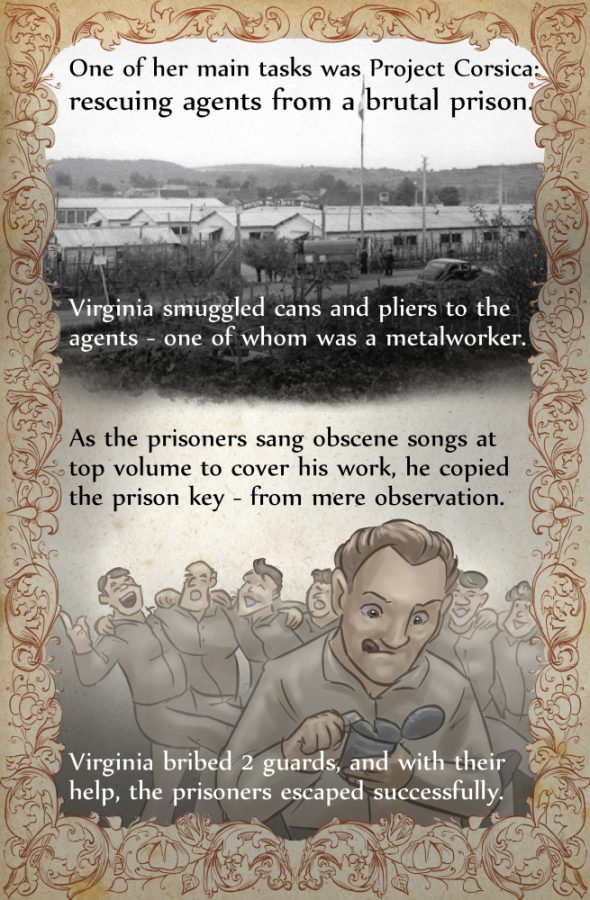 13 This first circuit she worked with was codenamed HECKLER, and comprised a large number of people, including a brothel madam who’d put her employees to the task of intel gathering. For a time, Virginia had virtual diplomatic immunity due to America not being in the war, but come Pearl Harbor, it did not afford her any additional protection.14 This prison break was originally for a crew of primarily downed pilots at Beleyme Prison; they were transferred to a concentration camp shortly before their break. They escaped at night, although a handful refused to go and stayed in the cell. 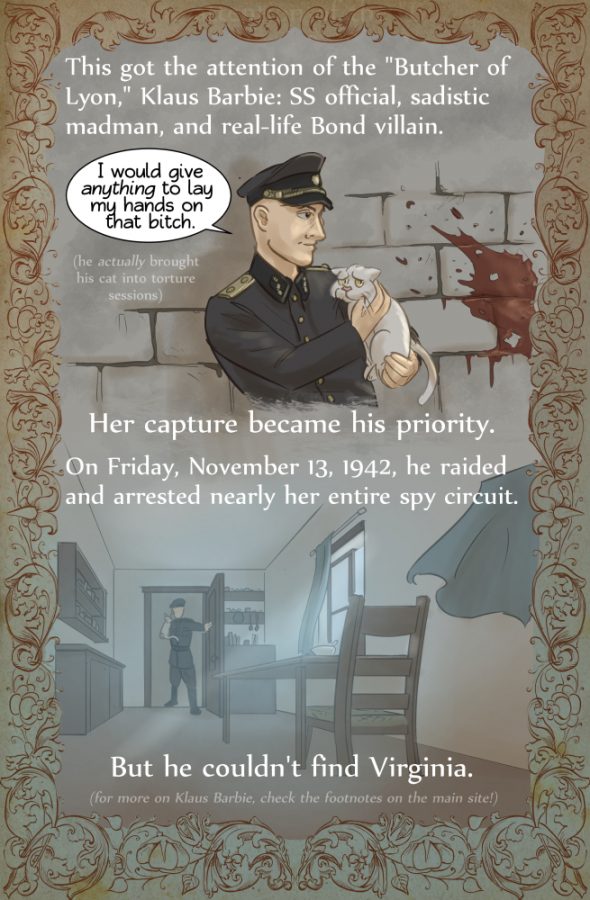 15 Klaus Barbie actually thought she was Canadian, and the real quote is “I would give anything to get my hands on that Canadian bitch.”16 Barbie was an utter lunatic, doing things like playing piano during torture sessions. He was allowed to move to South America in turn for cooperation. He was discovered by Nazi hunters Serge and Beate Klarsfield, whom I covered not long ago here, in 1972, and sentenced to life imprisonment in 1987. He died of Leukemia in jail in 1991.17 Barbie rounded up the other members of her HECKLER circuit, arresting and torturing them. He’d sent a crooked abbot named Abbe Ackuin to infiltrate their work, but Virginia was suspicious of him from the get-go. When the North African front began to heat up, Virginia was told to flee, and she did. 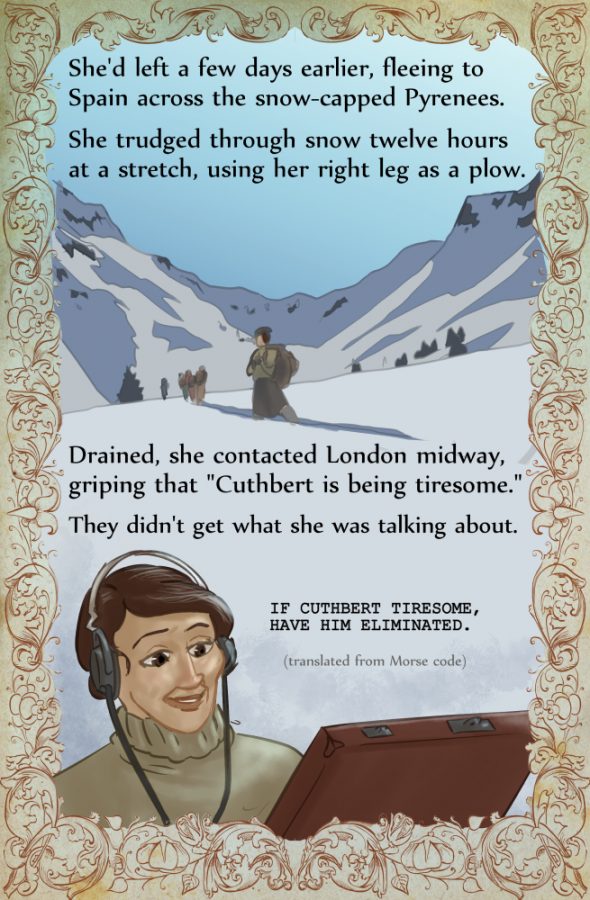 18 I skip over an episode here that happened when she got to Spain: she was arrested, along with the two other men with whom she crossed the Pyrenees, for improper documentation. She was not allowed legal representation or to communicate with the consulate. She was jailed alongside a young prostitute named Elena, who was in failing health. Virginia nursed her back to health, and she was eventually let go. For Virginia’s kindness, Elena made contact with the US consulate upon her release, and the consulate then got Virginia out of jail. 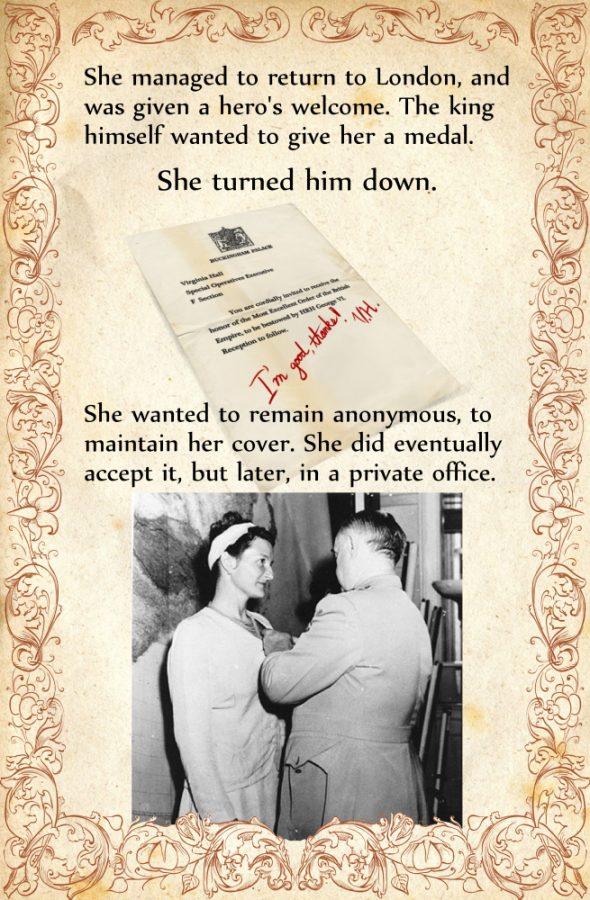 19 She was put on desk jobs for quite a bit at this point. She could have had an easy, cushy job, but she really wanted to go back out in the field – it was a rare thing to turn down the king. 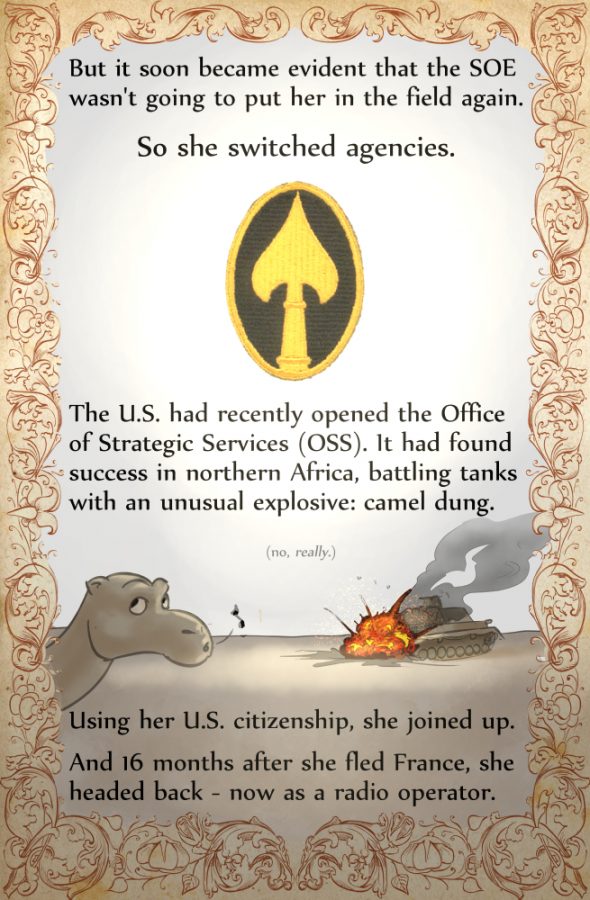 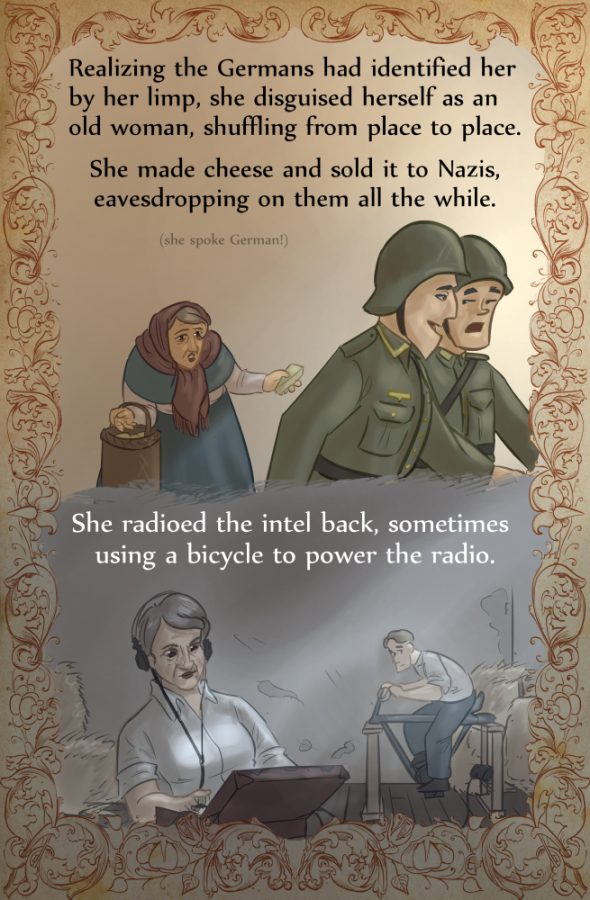 20 She operated out of a barn, riding all over to find good parachute drop points and only occasionally using the bicycle for power. 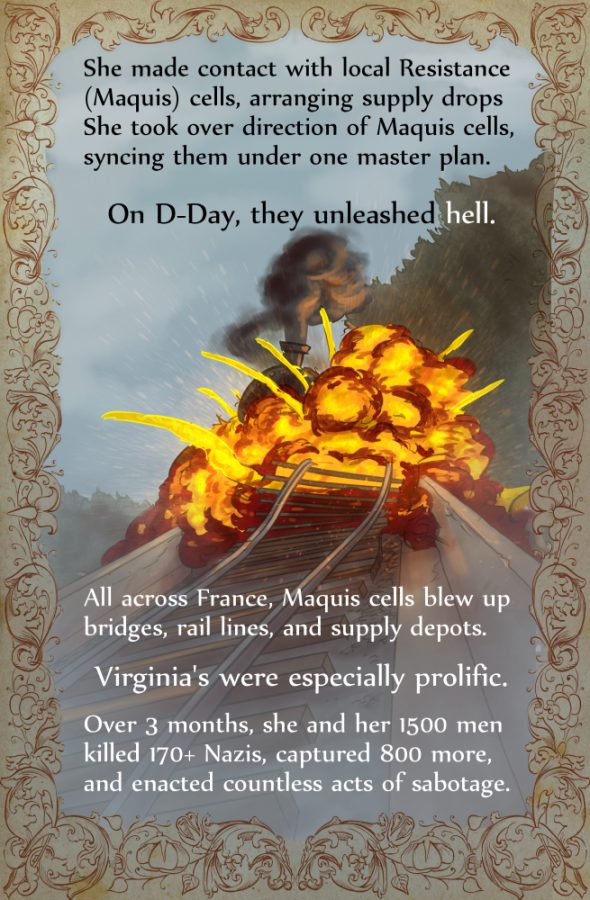 21 On D-Day itself, she actually stood guard for their operations and came perilously close to shooting some nearby Germans, who drunkenly stumbled away before discovering their bombing plot. 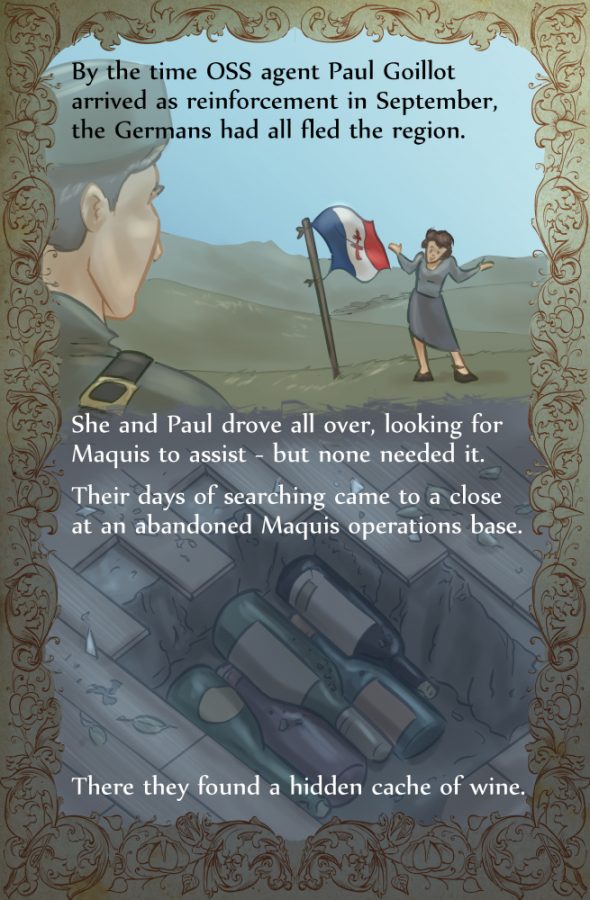 22 There were a handful of guys dropped in with Paul, but by the time they arrived, the region she was in (around Lyon) had been largely liberated. 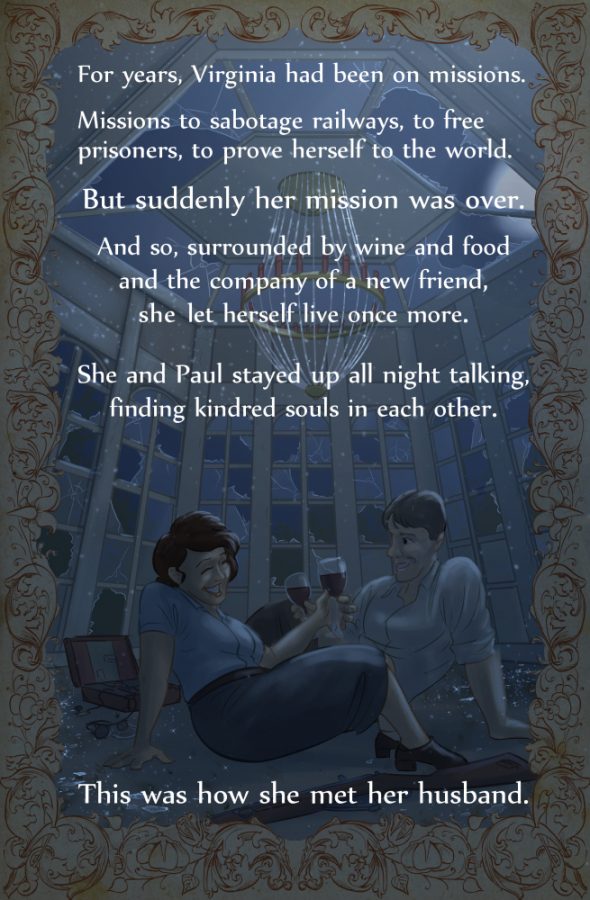 23 Their courtship was fairly brief – they fell for each other quite quickly, although they waited until 5 years after the war to marry, and did so in a private office. This was due to the protests of Virginia’s mother. She didn’t think Paul, who was a French-American soldier with not great prospects, was good enough for her daughter. She eventually relented. 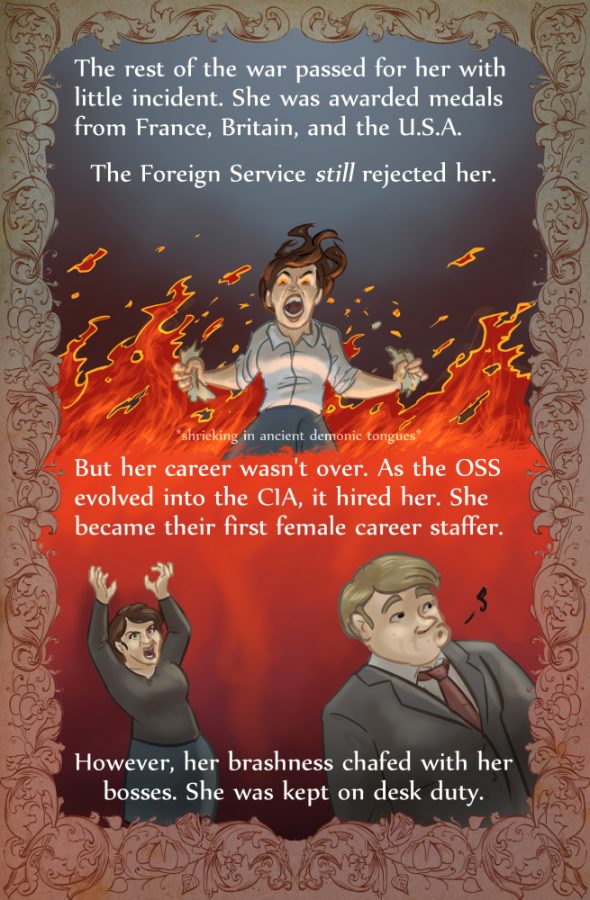 24 I don’t know that Virginia was nearly so filled with rage at her repeated rejections (this one was ostensibly because of budget issues), but I wouldn’t be surprised. The CIA had her on anti-communist activities and working on South American projects, but never put her in the field again. From the sound of it, they never made much use of her expertise. 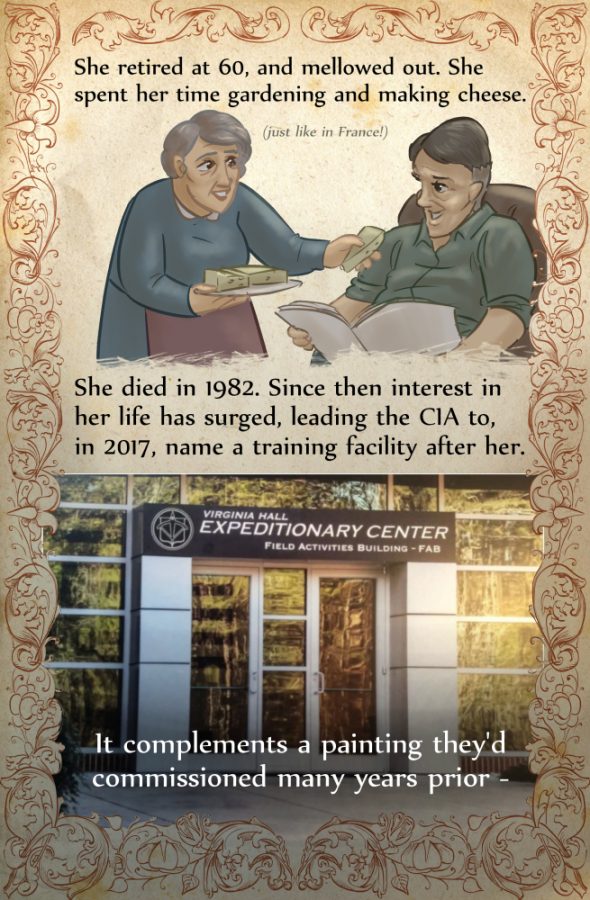 25 She also had some very lovely poodles – five in all. 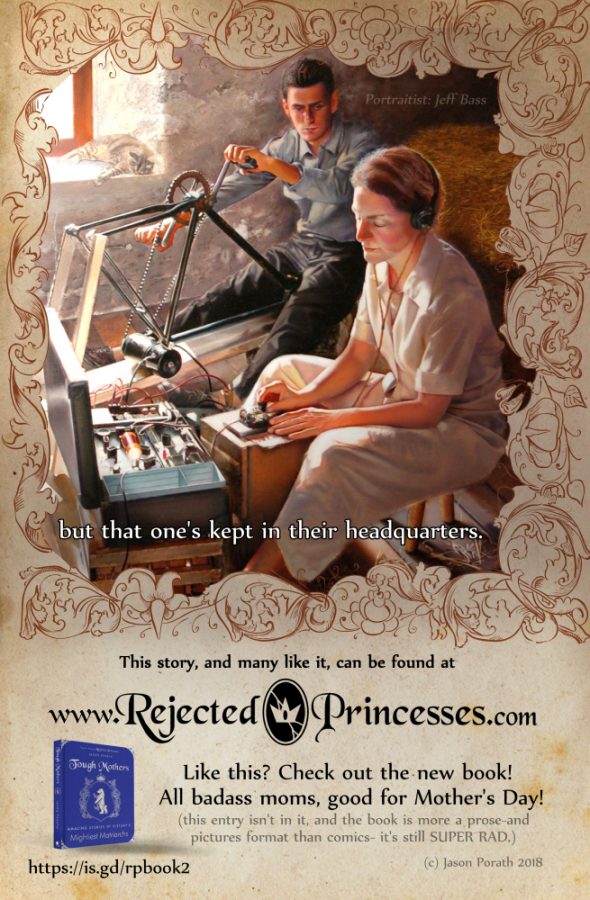 The book is available right here! For more info on it, check out here!

I had a tough time compressing this story into a comic that wasn’t 100 pages – so I feel like it’s a bit rushed in parts, especially where she meets Paul. But honestly, their romance really happened that quickly, it’d seem! They waited 5 years to get married, but that was just to get the parents on board. By the accounts I read, they fell in love pretty quick.

In terms of colors, I tried going for a theme of red for anger and imbalance, desaturation for numbness and keeping undercover, and blue for instances of happiness and balance. I kept to it for the most part although I could have pushed it a bit more. I view a lot of her internal struggle as her wrestling with her own outspoken nature.

If I’d had more time – I pulled a lot of all-nighters to get this one done – I would have come up with a different pose for the “poster” image that portrays Virginia in more of her spy mode. That said, the night in the abandoned chateau that she spent with Paul leapt off the page and I wanted to illustrate it to the best of my ability, so I’m okay with how it ended up. Hopefully I don’t get angry emails saying I’m kneecapping her legacy by not portraying her at all given opportunities as a lethal super-spy. Ah, who am I kidding, this is the Internet, it’ll probably pop up in the first five minutes. :)

Oh yeah – and she is getting her own movie! Will be played by Daisy Ridley. :)

I was pretty tough with the hint on this one — many guessed for codenames about Atalanta, but the one I was going for was Artemis, who could also run quite swiftly. Well done you all!

This WW2 woman could not run as fast as her divine Greek code-namesake, but what she lacked in speed, she made up for with a trusty sidekick of sorts.

Shapira, Ian. “The Nazis were closing in on a spy known as ‘The Limping Lady.’ She fled across mountains on a wooden leg.” The New York Times. July 11, 2017.

One-Legged Spy Virginia Hall Gets Her Own Movie
One of the most dangerous spies in WW2 was one-legged Virginia Hall (and her wooden leg Cuthbert) -- and she's now getting a movie, starring Daisy Ridley!

When this Scottish woman, against all odds, held off troops with a bit of trickery, they could have called it the Rout of Joy instead. 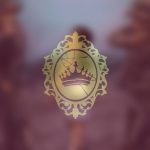