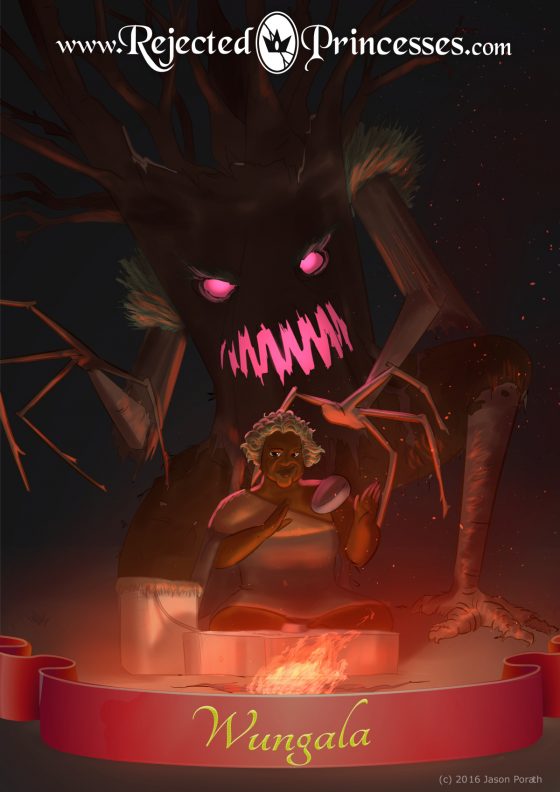 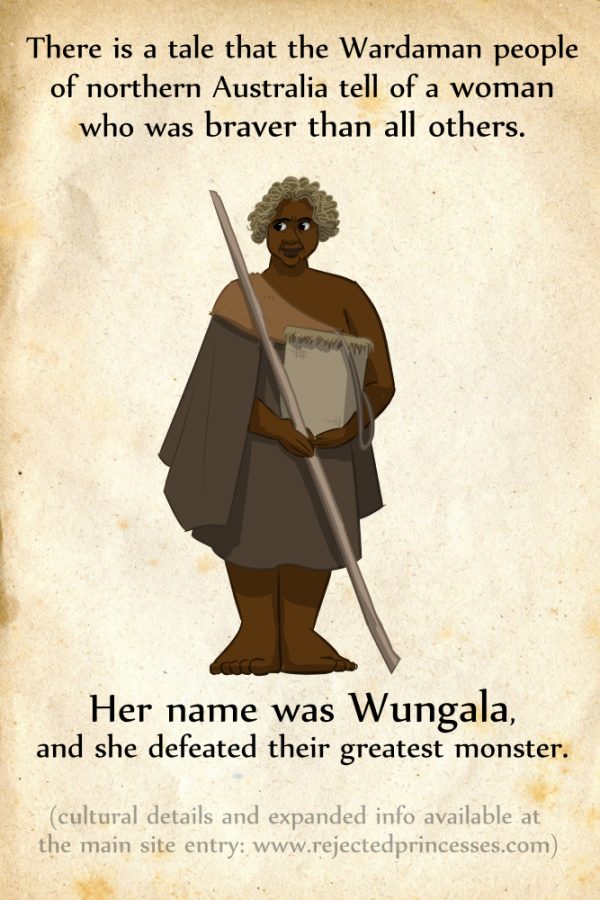 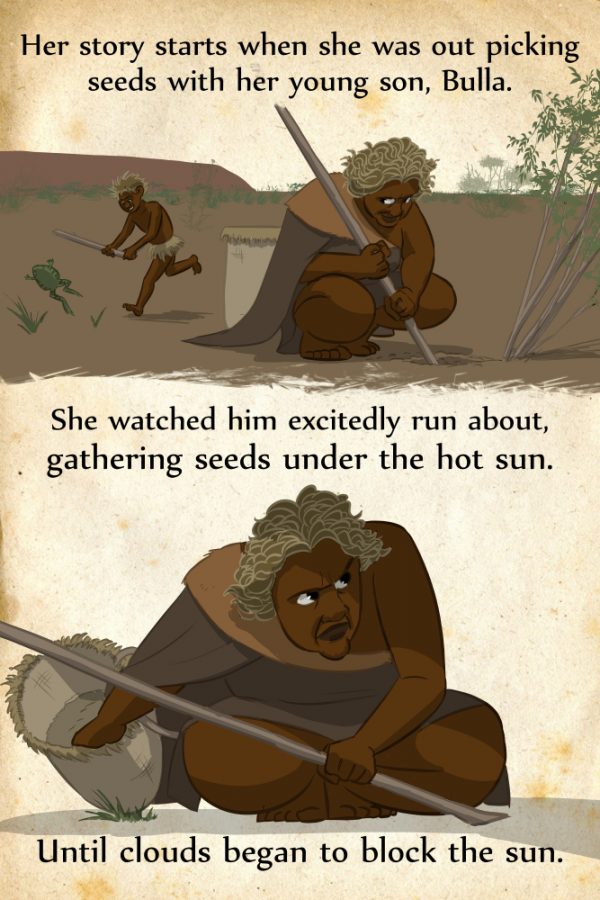 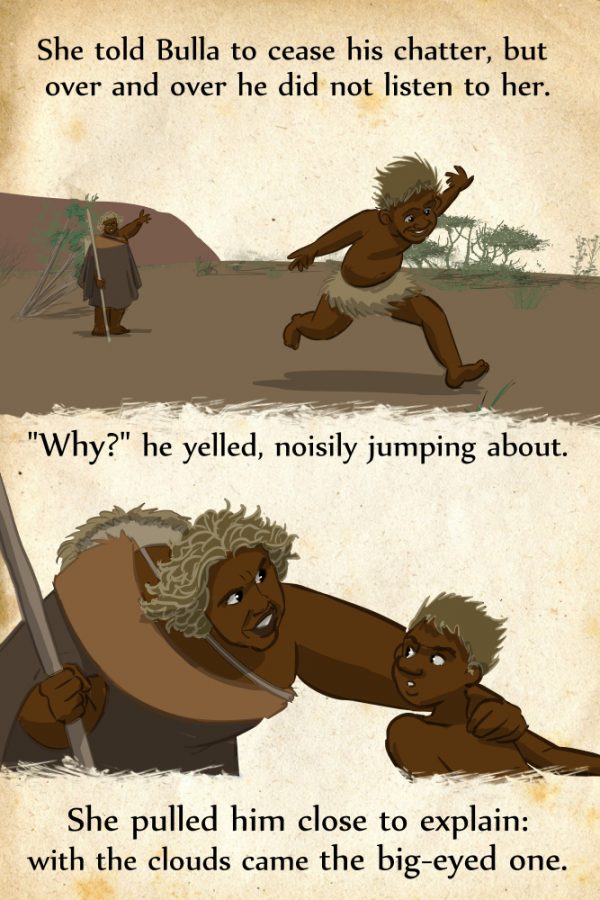 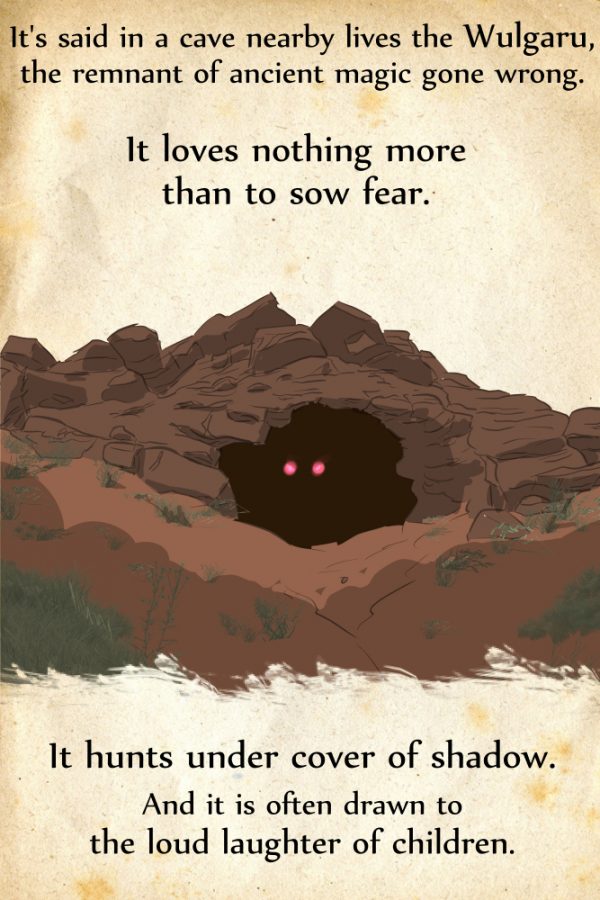 3 The origin story of the Wulgaru comes in a different tale – basically, in ancient times, a lazy man named Djarapa created a golem of sticks and clay and rocks to do his bidding. However, it had a mind of its own and would not obey. In various tellings, it’s described as having taken on the role of judge of the afterlife. I am unclear as to whether there is just one Wulgaru or multiple. The Wulgaru appears in multiple folk tales, including one where a woman named Weinga tricks it into destroying its own arm, and thus escapes from its clutches. 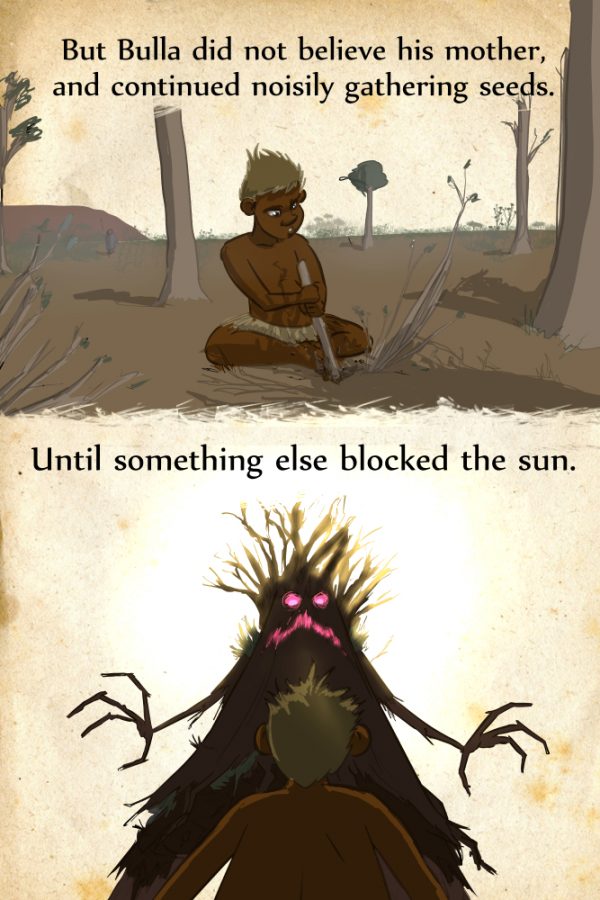 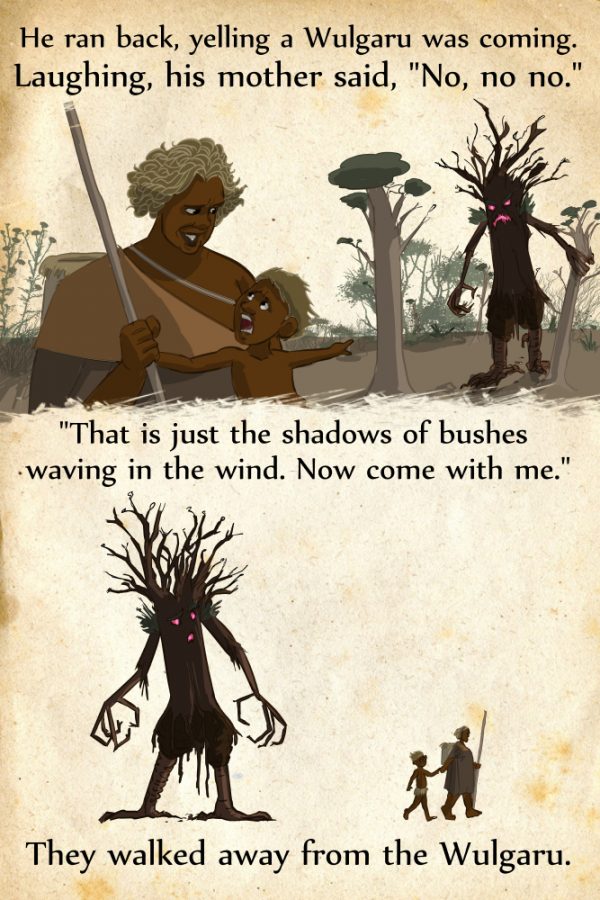 4 The original text denotes here that Wungala noticed the Wulgaru, and decided to remain calm, as what it wanted most was for her to be afraid. Given the translation here to a visual medium, I decided to keep her inner thoughts a secret until the end. 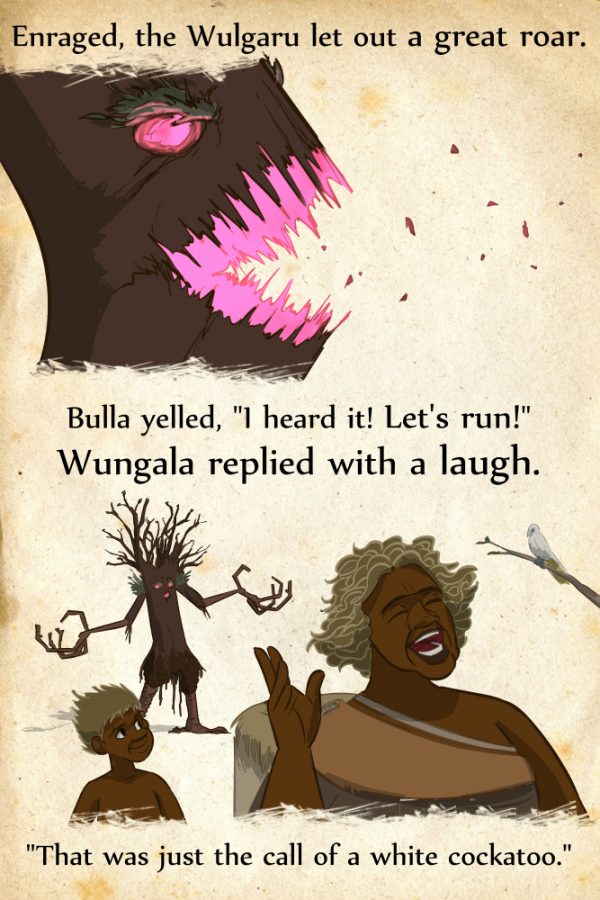 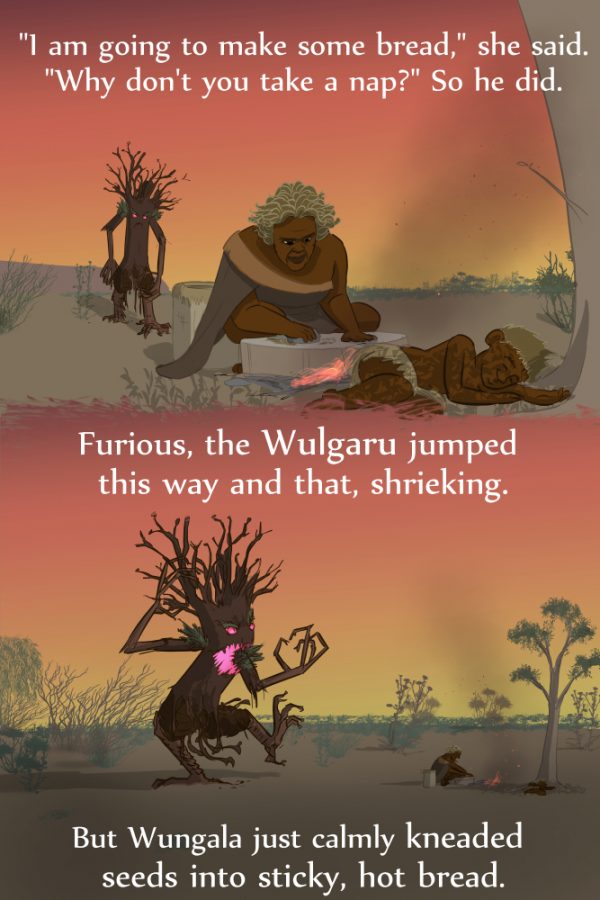 5 This is nowadays called Bush Bread, although the original text called it “damper bread” – which seems to evolved into more of an umbrella term. It was a type of traditional aboriginal bread created by grinding up seeds, and could possibly predate the invention of bread in Western cultures. 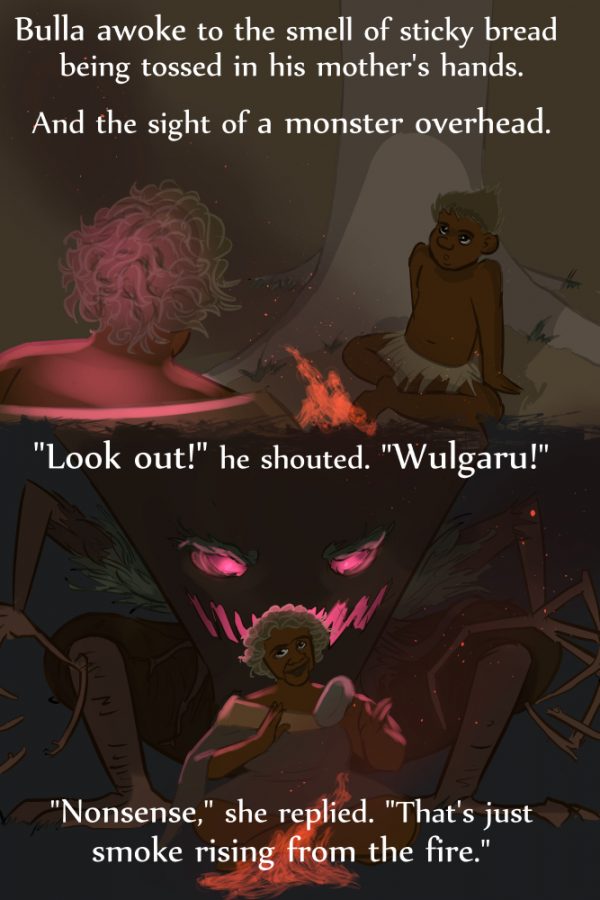 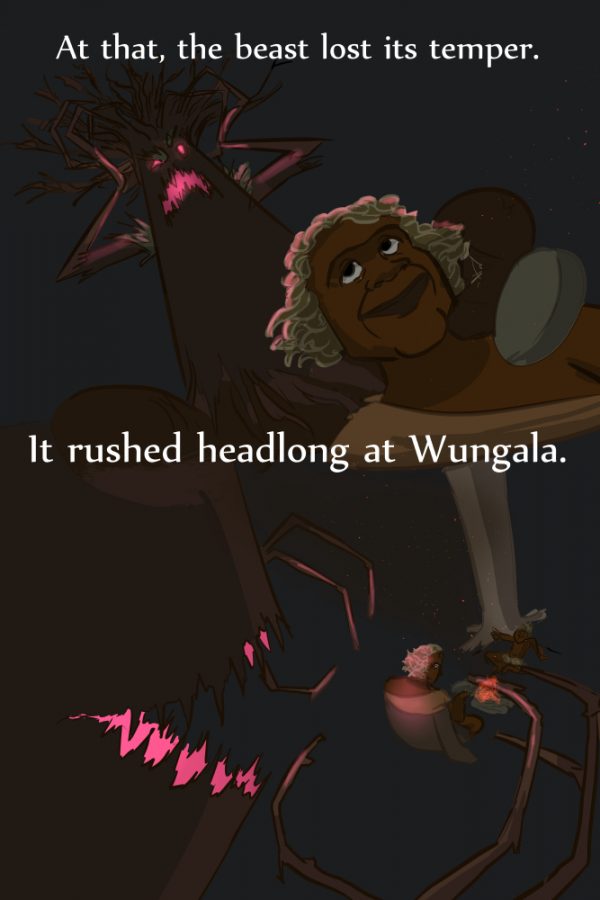 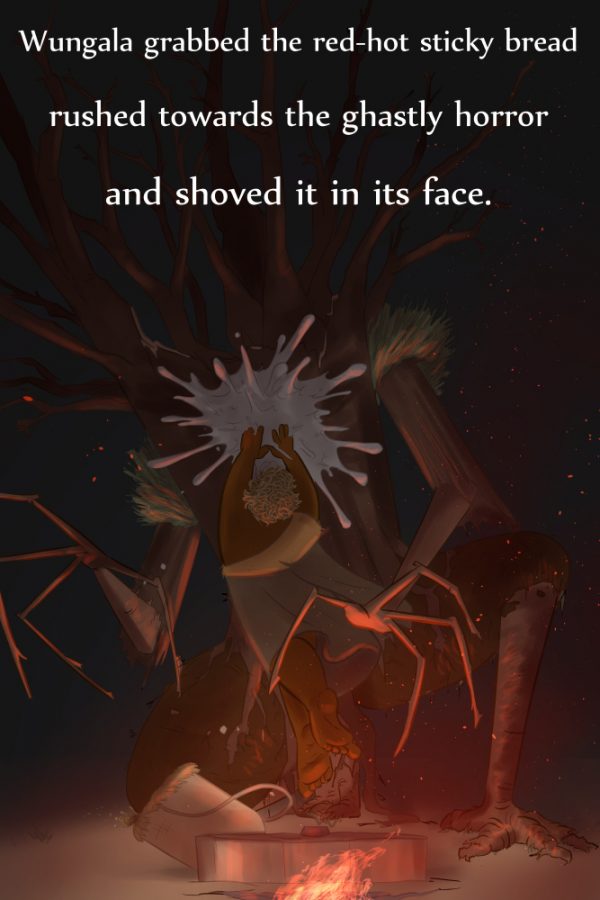 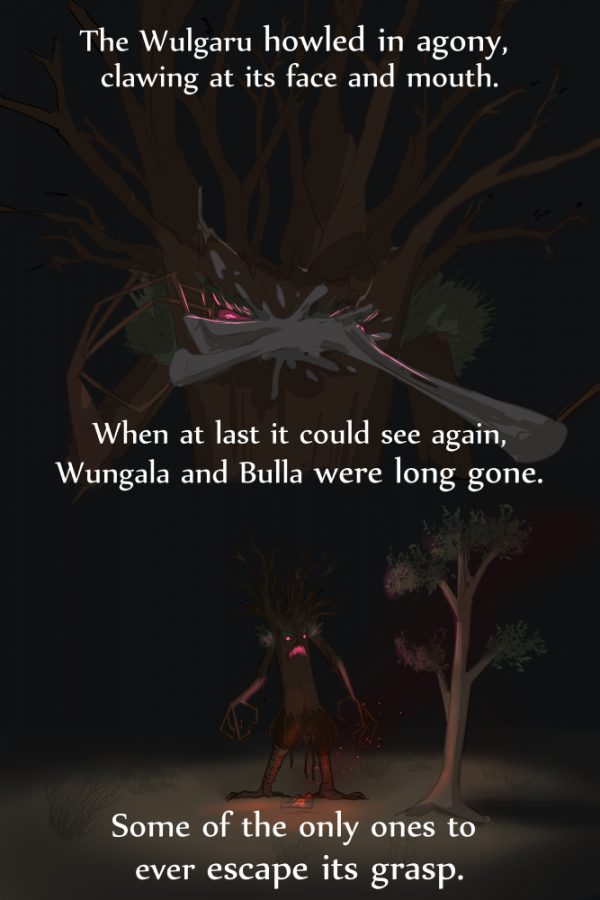 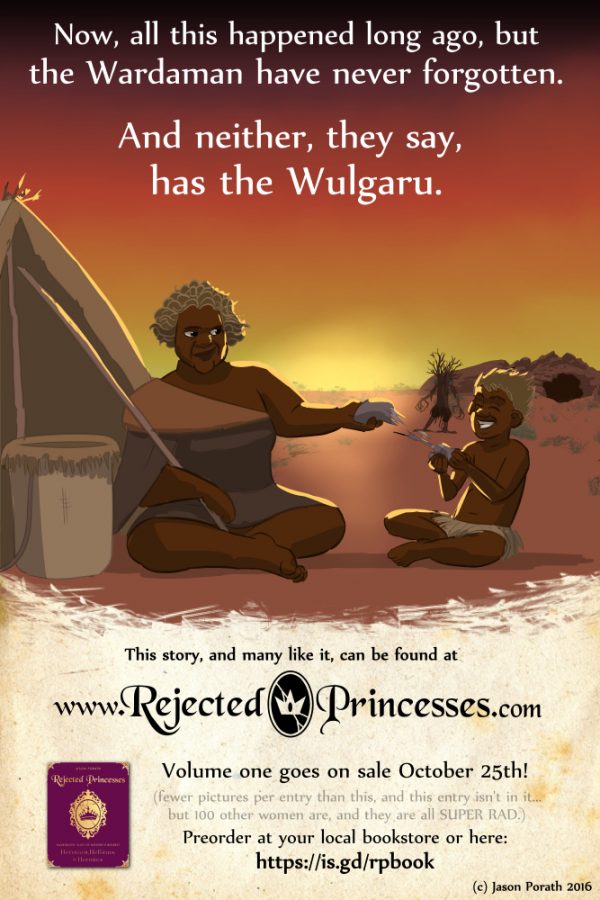 First off: this entry wasn’t taken lightly. Australian aboriginal cultures place enormous cultural importance on storytelling. It is how they maintain their history, how they maintain their culture, and how they pass it down to future generations. In the past, some of their most sacred stories were told to outsiders and then published without cultural understanding or permission, causing a lot of anger and hurt feelings. Although I knew about the story for some time, I only took it on for a couple reasons:

Anyway! As regards the art decisions for this entry:

Not bad! Sorry for switching up the hint midway through!

Defeating aboriginal golems with hot bread? Should have called her tribe Waddawoman. (or in modern spelling, Wardawoman)

Pearson, Maggie. Ghosts and Goblins: Scary Stories from Around the World

My book for the other entry still hasn’t come in, so shuffling it back again. Here’s your hint for the next entry:

After her husband died, this native Chilean fought against the Spanish so hard that Chile’s navy named a series of ships after her.