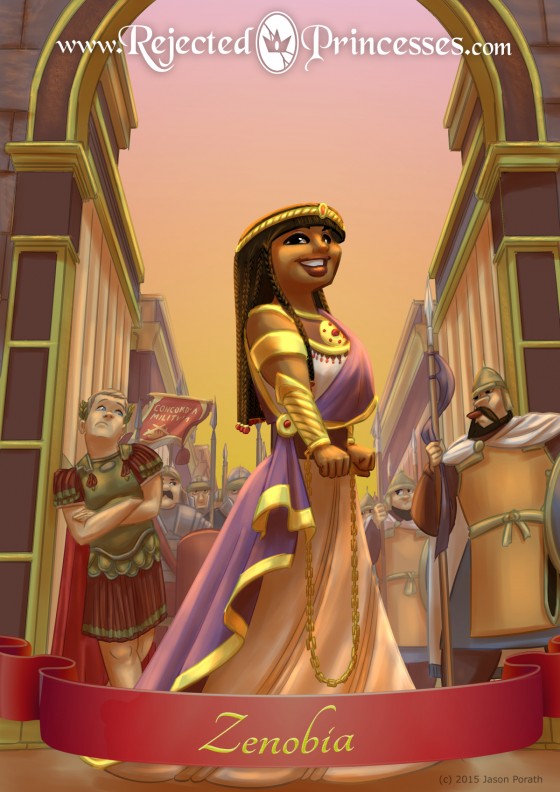 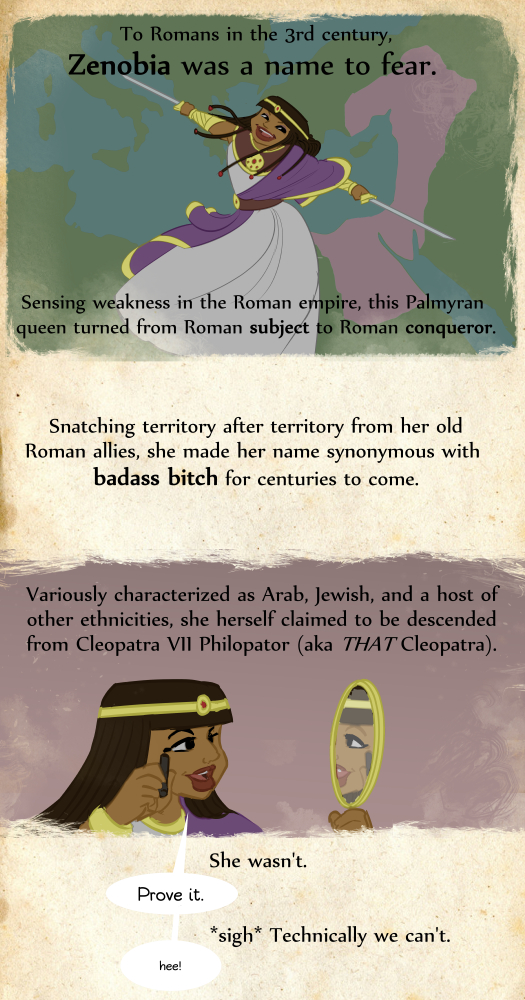 1 Palmyra is in current-day Syria. At the time it was called Tadmor, so feel free to make your own “Now it’s Palmyra, not Tadmor” They Might Be Giants parody. She also said she was descended from Dido — the one who founded Carthage, not the one who just wants to thank you — but she wasn’t. Well, probably not, at least. She was described as having a dark complexion and being more beautiful than Cleopatra, despite artwork of her consistently depicting her as light-skinned. 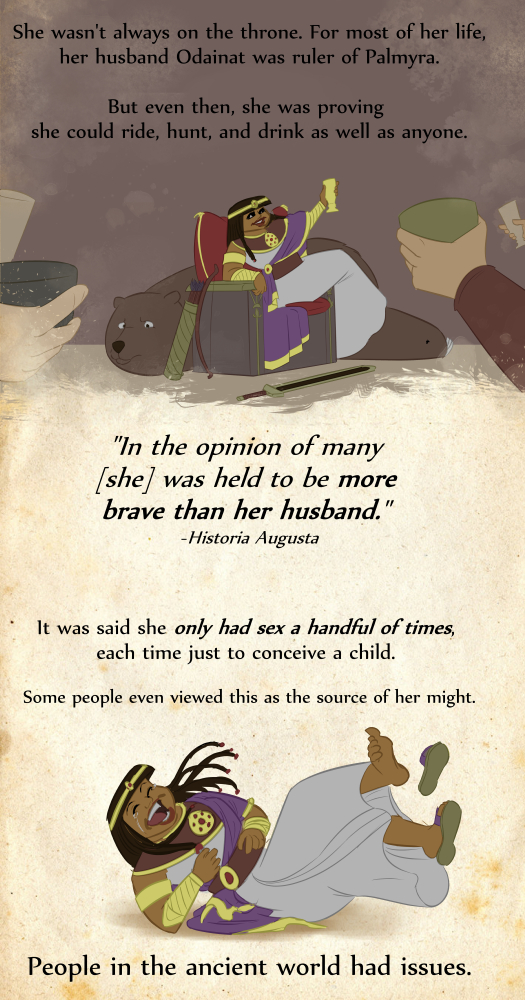 2 She went hunting with her husband, and could march 3-4 miles with the troops at a time. She also didn’t really use her chariot, just went on foot. Also, Odainat is often called Odaenathus. Odainat is the Aramaic spelling. As for the “super chastity” powers, this sort of thing happens a lot with historical depictions of women. You’re either a virgin with Magic Purity Powers (Joan of Arc, Elizabeth I, even Catalina de Erauso) or a slatternly wench who cavorts with the devil (Catherine the Great, Theodora, Pasiphae).

3 Odainat actually died when he was assassinated by his nephew, although it’s certainly possible that Zenobia had something to do with it. Their heir was underage, hence she took the throne in his stead until he came of age, and proceeded to attack Egypt pretty quickly. Why she actually went against Rome is still a mystery for the ages. Most historians just assume she wanted to rule in her own right.

4 Rome had been dealing with lots of other uprisings, on top of a regime change. Zenobia probably thought this was her best chance to strike out on her own. Also, Aurelian’s cup here reads “NVM I AVGVSTVS”, which is sort of like “#1 Boss.” I thought it was funny, at least.

5 And yes, I know Latin only used the letter X for Greek loan words. Please don’t send in emails about this.

7 Christine de Pizan is in the book!8 As a rule, this project tries not to be political, especially in times of war, but seriously, screw those guys. Yes, they had a reason – to cut off the present from any non-Islamic past, and establish their theology as the only option. I’d rather not dignify that line of action by calling it “reason.” (but hey, Ogre Battle is great!)

Almost a clean sweep this time!

Next week I’m taking a break to have a creative recharge, see my parents, and mix up the format slightly for the next entry. I’ll be back in two weeks. Your hint is:

While the ghost of this woman may or may not have haunted Lady Stanhope, there’s no way she’s leaving ISIS alone, after what they’ve done.

Hester Stanhope
100 years before Lawrence of Arabia, this British woman traveled the Middle East by herself, surviving shipwrecks, plagues, and Bedouin attacks in the process.

For this fresco painter/mercenary soldier, it was better to live honored in exile than dishonored at home.