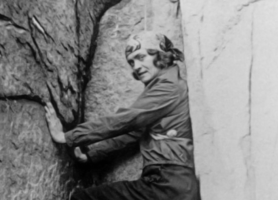 Men? Mountaineer Miriam O’Brien Underhill Don’t Need No Stinkin’ Men – She pioneered and argued for “manless” climbing in a hugely influential 1934 essay. From an essay she wrote: I saw no reason, why women, ipso facto, should be incapable of leading a good climb. They had, as a matter of fact, already done so,... Read more »
Gertrude Bell (1868-1926)
Edwardian England's Loudest Advocate for Iraq
Tossed off the expectations of Victorian society to become an expert mountaineer and archaeologist, traveled the Middle East by herself – later teaching Lawrence of Arabia how it’s done – and became one of the most influential women in the English empire, advocating loudly for Iraq’s self-governance.