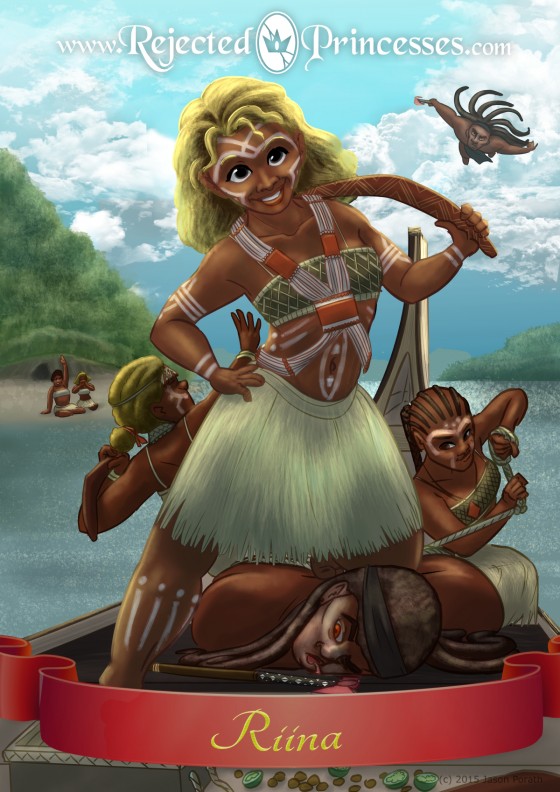 Once upon a time in the Solomon Islands, two women were having a Very Bad Day. How bad, you ask? Well, they’d been kidnapped by two ghosts. These weren’t the dude-in-sheet ghosts you might think, no — these were gosile, hungry monsters who wanted to eat raw human flesh 24/7. They’d swooped down from the sky and kidnapped the two women, taking them back to their far-away island.

Now, to be fair, the gosile tried being good hosts! When the women cried out, “please don’t eat us!” they obeyed, and didn’t eat them even a little. Not one bit! Instead, the gosile were quite neighborly, teaching their captives how to fly and bringing them plenty of food! However, the food was human sushi and the method of flying involved cutting off their feet and draining out blood from their legs. These were significant contributors to their Very Bad Day.

Subsequent efforts by the hard-working gosile just made matters worse. When the captive women pointed out that they didn’t like to eat dead humans – no, not even the brains, and yes, they knew that was the best part –  the gosile went out of their way to procure and even cook fish for the picky footless women. Why, the thoughtful gosile even, on one trip, brought back the rotting corpses of two of their captives’ close relatives. And yet, this just made the captives cry and cry! What’s a hard-working undead kidnapper to do?

Many tried to rescue the women. Their husbands put forth an enormous reward of coconuts, porpoise teeth, pig tusks, and strings of shells (what else could one ask for?). Hundreds of canoes set off to rescue the women, but none returned. Witnessing the many failed rescues prompted the women to cry out, “is there no man to save us from these monsters?!”

The story of the kidnapped women (and the attendant reward for their return) had spread widely, eventually reaching the ear of Riina, leader of the warrior women on the island of Lumalao. She met with the two reward-offering husbands and offered to kill the gosile, but was met with derisive laughter. This pissed her right the fuck off.

Stomping her feet, she proclaimed, “these are just gosile – and male gosile at that! I am stronger, and I will break their jaws!“

These are just gosile – and male gosile at that! I am stronger, and I will break their jaws!

And so she and several of her warrior women loaded up a canoe and set out for the gosile island. As they got near, they heard the tell-tale sound of approaching gosile — whooooeeeiiiii, sounded the wind as it blew through their long hair — and Riina told her compatriots to duck down and hide. Standing tall, she faced the oncoming gosile. Seeing a single woman with no backup, the gosile brandished his red stone axe and dove straight at her!

This was a mistake.

Riina grabbed the motherfucker by his hair, slammed him down on the boat, and jammed her knee into his back. As the other women started tying him up, Riina interrogated him, shouting “where do you get your power?!” Stammering, the gosile answered, “from betel1 Betel nuts are a delicacy of the tropics, Asia, and parts of east Africa. Prepared properly, they’re a psychoactive drug. Which may help explain why this guy thought he could fly., lime, and my axe!”

Now, in Melanesian culture, it’s taboo for women to step over sacred or magical items. It’s a big no-no. As everyone knows, something about a lady’s feet robs items of their magic powers. Walking over them deliberately is downright un-neighborly.

Thus did Riina come to do a little jig over the gosile‘s personal effects. Deliberately, and with great glee. And thus did his magical weaponry become so much detritus.

The canoe landed on the gosile‘s island, and the warrior women entered the cave where the women were held hostage. This cave, while likely well-furnished according to gosile specifications, left much to be desired for the average Melanesian. There’s no way around it: the walls were lined with rotting skulls. No matter how nice the color scheme or how fetching the rug, it would prove hard to draw attention away from the preponderance of ghastly murder evidence.

It is at this point that the second gosile ambushed Riina, attacking her from behind! However, she proved too quick for him, swiftly producing her special weapon — a boomerang — and hitting him with it so hard that he died. Yes, she hit a ghost so hard with a throwing stick it died. That is how strong Riina was.

With the gosile dead, Riina freed the two women, kicked over the rows of skulls, and paddled back to get her reward. They were met by happy husbands and thanked by way of a fancy meal, one mercifully free of human sushi.

There are many other stories of Riina and her band of warrior women, but perhaps they are best saved for another time.

Solomon Islanders, peculiarly enough, have a gene for blonde hair that evolved entirely separately from Europeans! It looks neat: 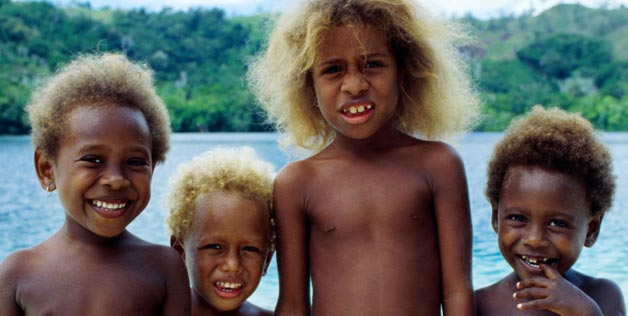 Given that the most specific origin for this story was “Solomon Islands,” and that the Solomon Islands are home to a great many similar yet distinct cultures, the representation here is, of necessity, a mishmash. However, all the details of their outfits come from visual reference.

Also, despite some repeat searching, I could not actually find other stories of Riina. The book from which I took the story said they exist, though – would be happy to hear more, if anyone can find them!

Clearly way too easy on you all! I shall have to redouble my efforts. You all got it right:

When flying cannibal ghosts proved unstoppable, their captives cried out, “is there no man to save us from these monsters?”

Although she never really made it into the Shahnameh, this heroine’s adventures – particularly on her wedding night – are worth hearing. 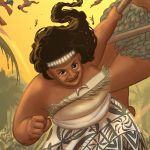 The Goddess Who Killed With Courtesy